It's the Hard Knock Life for Us: When Jupiter Goes Retrograde 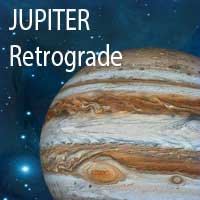 Jupiter is the planet of luck, expansion, growth, generosity, wisdom through interacting with other people and the world, higher learning, religion, law, and philosophy. It's one of the beneficial planets. It makes easier whatever it touches. So, when it goes retrograde, the energy goes backward and inward, but it doesn't deny benefits. They just don't manifest in the way you might expect, and they don't manifest outwardly. However, if you can roll with a few disappoints or hard knocks, a retrograde Jupiter will give you treasure that you can never lose and will never dull or fade.


Jupiter Retrogrades in the Future

This may seem to be a long period, but if you look back on your life, there were probably streaks when nothing seemed to work out as planned and yet you came out the better. Incidentally, Jupiter Retrogrades may coincide with times where you didn't get what you wanted, but got what you needed. In the end, you would much rather have the blessing Jupiter Retrograde gave you than to have gotten what you wanted.

- During a Jupiter retrograde, a young woman realizes her long-term crush will not love her back. During this time, she learns to value herself and what she has to offer. In the end, she's the object of desire.

- During a Jupiter retrograde, a man who was once a rich playboy feels sorry for himself because he's lost all of his money. Just when he thinks his life is over, for the first time in his life, he meets a woman who loves him for who he is and not what he can buy her.

- During a Jupiter retrograde, a woman suddenly changes her plans from wanting to move to a big city to getting a job in the small city she hates living in. She doesn't get the job and is forced to move. When she gets to the big city, she gets a great job, makes friends, and finds a great boyfriend.

- During a Jupiter retrograde, a man doesn't make partner at his law firm. He realizes that what he really wants is to strike out on his own. He starts his own firm and within eight years, he's winning multi-million dollar verdicts.

When a Door Closes, a Window Opens

Jupiter Retrograde isn't like Mercury Retrograde. It doesn't actually screw up things. It doesn't make messes, and it doesn't make things stop working. So, it doesn't necessarily mean that you have bad luck for three months, or you don't get a raise, or you do poorly in university studies, or that you get stranded on your overseas vacation. It actually means that all of the expansion, luck, growth, winning, and good things that happen with Jupiter happen on the inside. This can mean a few things.

Literally, it could mean you don't burn the calories you're putting in and you start to grow, from the inside out. It's always a good idea to watch your diet during a Jupiter Retrograde. In fact, if you're starting a restrictive diet or a new eating lifestyle, one of the best times to do it is during a Jupiter Retrograde. Jupiter likes to indulge in the finer things, but it's easier to be picky during the Retrograde and to say no to indulgences.

But more likely, you're growing as a person. You're maturing, and it's not the coming-of-age that warms the heart, but the kind that breaks it. You don't get what you want when you want it, but what you do get is often unexpected and much better. How this will happen in your life depends on where Jupiter is going retrograde.
For example, if transiting Jupiter is going retrograde through your 7th house, your relationships may not go so smoothly, but you will get something out of it. You might endure a hardship with your partner that brings the two of you closer together. Or, you may realize they aren't right for you and you find someone who is right for you. Or, you may find that you make professional partnerships with people you wouldn't have worked with before, but in the end, it works out well for you.


How to Work With Jupiter Retrograde

It's best to not start something new during a retrograde, especially if it requires dealing with the world outside your own mind. However, anything you have been turning over in your brain but hasn't committed to paper or any other material form of manifestation isn't forbidden. It will work out, even though it may take some trial and error to get it how you want it, and you may not complete it during the retrograde.
It's also a good idea to not force things out in the world. If something doesn't work out, it's best not to fight it if you don't have to fight. If you find out that say, the dream job you applied and interviewed for went to someone else over you, don't keep demanding explanations or references, or to be kept in mind if the job opens up. Something better is coming along, and it may be something you couldn't have imagined getting. Even if it feels as if the universe is kicking your ass down the sidewalk, you still being pushed in a particular direction. Go in that direction, because what you think you want is not always what you really want.

Jupiter Retrograde: Getting What You Actually Want, Not What You Merely Think You Want

Jupiter retrograde makes you grow from the inside out. It works with what is really going on inside of you, and what you really want and desire. You may think you want something but it may not be what you truly, actually want. For example, you may want to be rich. In reality, you're not, and it may be because you don't actually want to do the things that would lead you to garner wealth, or to make the sacrifices involved. Not having a demanding career or business certainly frees you up for other things. Or, you may actually desire the avoidance of failure more, and that is why you don't do the things that would let you gain wealth. Jupiter Retrograde forces you to confront your actual desires so you can address the issues.

Imagine that you try to get into a top medical program at an elite university. The competition is fierce, and you have to endure it. Your parents want you to go there and become a doctor. Your teachers expect you to go there. You have assumed that you would go there. You do everything you can to make yourself the best candidate possible. But, you just don't get in. You're devastated. In the meantime, you feel lost. Everything you thought you wanted is not going to happen. You think your life is over.

One day, you're walking down the street and you see a flyer for an audition for a play. You figure you have nothing better to do, and you're curious. Acting? You have nothing to lose, so you're not nervous when you audition. You get the part. As you practice, you realize that you love acting. You realize that this is what you really, truly want to do. You're good at it, and moreover, you want to get better at it, and you enjoy doing it. It is what you really want.

You then realize that the entire time you were trying to be a good student, a good child, and make people happy by trying to become a doctor, you were just playing a role, just the way an actor would.

During the Retrograde, focus on what you really want. That may scare the hell out of you. You may realize that you're not living the life you want, or you're not going for what you really want. You may have to make some changes. This is the time to do that. Don't fight any disappoints that happen. Just accept them as blessings that keep you from doing more of the wrong thing.

Comments: It's the Hard Knock Life for Us: When Jupiter Goes Retrograde