The Yellow Earth Dog 2018 - the interpretation of the character 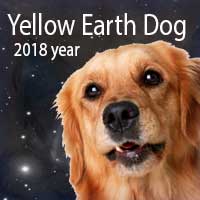 According to the Eastern astrological tradition, 2018 will correspond to the Dog. The color of the period is yellow, and the elemental affiliation is earth. In this way, the overall image will be the following: the Yellow Earth Dog. But what does this mean? In actual fact, everything is quite simple. The dog is an allegory of loyalty, dedication, protection, family comfort, warmth, and goodness. In certain instances, it is a symbol of maternity and blood ties. Earth is the foundation, the basis, the thing we can thrust off in our development, and simultaneously the thing we can't exist without. Like a building without a foundation. The color yellow remains. You must understand that in the East, yellow is almost always associated with gold, with something solemn and sacred. We remember the 'yellow river' and the 'yellow skin color', the cycles now widely adopted, coming to us from the East. Thus the symbol of 2018 is completely unambiguous (in contrast to, say, the Monkey or the Rooster). This will be an excellent time for dealing with family matters and, as such, for establishing families. This period is literally designed for establishing warm friendships with people of various professions, passions, and social strata. During this period even the infamous conflicts of the generations, between fathers and sons, will be reconciled, simply because it will make no sense for the conflicts to continue.

Without a doubt, Taoism, Confucianism and any other eastern religion (more specifically, moral and ethical teachings) gravitate towards the ambiguity of all the processes in the universe, even the universe itself. That's exactly why the icon of 2018, the Yellow Earth Dog, also needs to have its 'weak sides', that is, by projecting a philosophical image onto life on earth, there have to be aspects which we need to pay more attention to. Determining a list of such aspects is quite simple look at every dog. You will agree that many dogs (well, excluding Huskies and several other breeds) can bee lazy, feisty, stubborn and restless. Continuing the analogy, you should dwell on (purely human) qualities such as cynicism, pessimism, coldness, and subjectivity. Precisely these character traits could cause the most damage to you in 2018. From this perspective, the image of the dog is a warning for us, an indication of what kind of qualities could result in potential danger. In this regard the color yellow could indicate the same cynicism, or the banal desire for riches, uncontrollable, dominating others' ambitions.

Aside from that, the Yellow Earth Dog indicates that 2018 will be particularly difficult for people who don't have clearly defined views. The Dog won't be able to help them with anything until they pull themselves together. If you neglect this problem, the situation could reach a critical level. In this regard, you should also take into account the image of the Earth, the key element of the period. Fire makes Earth more solid, Air has nothing to do with it and, whereas Metal can easily change Earth, Water makes the ground wet and malleable. This means that sign of the elements of Water and Metal (in the eastern astrological system) will have special power over their lives and over circumstances during this period. True, the demand on them will also be greater, because nobody has done away with the laws of karma. With great power comes great responsibility. In any event, the Dog corresponds to Yang, the active, dynamic, male principle, and this means that victory will be achieved through action, not reasoning. You can't forget this, regardless of the situational context.

Comments: The Yellow Earth Dog 2018 - the interpretation of the character