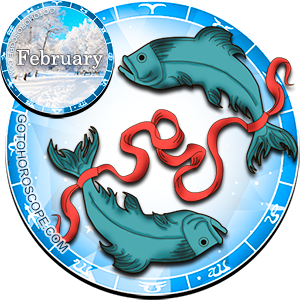 In February of the year of White Metal Rabbit 2011 the Pisces (the Fish) will be eager to stay in quietness and cosiness, to lie up and to think about their further plans. It is necessary to tell that February allows them to act like this, because their business activity is reduced: they go calmly and deliberately, without jerks and problems. Relationships with people around will be calm and friendly and Pisces will be able to enjoy the pause in activity and also the communication with friends and relatives. Harmonious relations as well as natural diplomacy of Pisces will help them make new acquaintance which might become useful in their future. Last year Pisces forgot about themselves, they worked flat out and such a respite will be very useful for that Zodiac sign, which doesn't stand out with purposefulness and multi activity.

The Pisces must look about their communication with team-mates and partners and not act alone at work, because their slogan of February can be: ‘Together we are a force'. In early February time the tendencies will be such that Pisces can't fight and work alone but they can do this for company, in a group. They will even take the lead, feeling support from all sides. They needn't do more then they can do and force events, because there is a major risk to take false steps in haste, make a hash of a job without stable foundation. Incidence of fraud from partners in early February is next to nothing - Pisces can rather believe the ideas of associates and repose to their experiences and opinion. Cooperative relationships of Pisces to partners will be an impact for all their business in February. Pisces' intuition in February will be up to the mustard and they will be able to become a leading light for others, forecasting swing-rounds and zigs in business. Pisces will be able to infer cause-and-effect relationships, to draw volume and practical conclusions, analysing the past business, and from mid-February they will start planning future, summing up their experience in management. Pisces-office worker will reduce in some way the activity at work and there is some danger that direction will consider this pause to be Pisces' laziness and the unwillingness to work. Not to get into such a situation, Pisces need to choose the work which concludes preparation to the action, scripts and plans making, communication with clients and partners. The financial situation of February won't be easy, although profits will flow to the budget regularly. There will be a shortage of the budget to the projects conceived by Pisces and that's why in February they won't be satisfied with finance and they will go on saving steadily because they will expect the future financial success of the next month.

It will be good if Pisces get support and understanding in the loving couple or in the family, if the nearest people can give them some breaks and can forgive Pisces their melancholy and cold attitude, which are actual in February. Pisces don't want to burn daylight because of the violent emotions and this month they will look rather alienated. In mid-February Pisces will relax and with time they will accept the whole-hearted support of the nearest person, and thus peace in the soul and in the family will be saved. There may be the other pole in late February, i.e. catharsis, and Pisces will feel like having temperament about nothing, making conflicts and carping, that will be the cause of a new phase of misunderstanding. Pisces will be stopped and treated from hysterics only by fear of losing a partner and in their emotions they won't pass the point of no return in breaking to the dearest people. At the last decade of February Pisces should go in for psychoanalysis and self-discipline for self-understanding, heart searching and for helping themselves in that complex situation.

Annual 2011 Horoscope for 12 Zodiac signs for the Pig Year