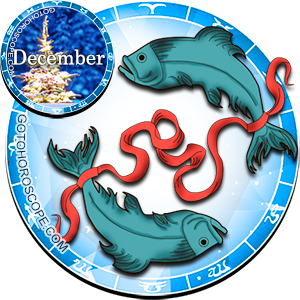 For the zodiac sign of Pisces, December 2013, will be such a time, which cannot be characterized by one general atmosphere .The fact is, that not many celestial bodies will affect Pisces this month. And then, even in the small group of planets that will affect Pisces, we cannot observe a unified paradigm of action. For example, Jupiter, the planet-ruler of the sign of Pisces, will greatly assist its earthly protege, but it is probable that during the New Moon (December 2013) and the Full Moon (December 28th) it will radically change its preference. The outcome is unpredictable. On the other hand, Mercury, one responsible for the "expulsion" of the sign of Pisces, at the dawn of the second third of the month may turn into a reliable and strong ally instead of an evil and cunning enemy. Only the influence of Venus, the planet-exalt of the sign of Pisces will have a uniformly positively characteristic. With that, the celestial priestess will most likely go beyond its usual boundaries and spread its positivity on not only personal relationships of Pisces, but also into the areas of business and finance.

As a result, December 2013 can be a very successful business time for the sign of Pisces. In order to improve the chances of such an outcome, we need to take into account the position of Mercury in respect to this sign, as well as the position of other celestial bodies. As a result of carrying out the necessary research, it is not difficult to understand, that for Pisces the main concern this period is to watch their competitors or the more "active" colleagues. It all depends on exactly how you work - whether you have your own business or if you prefer to give your time and efforts for the prosperity of an organization. If you are self-employed, then intensified competition should be your main problem. Strictly speaking, this is not as much of a problem, as a prelude to one. Specifically, in December you are unlikely to have anything straying aside from the plan, even with all the negativity coming from Mercury. But many of the actions committed today may be a reason for serious conflicts in the future. So carefully watch the slightest changes in your environment and promptly take all the necessary measures at the first sign of danger. Do not miss a single detail - believe me, it is important.

In terms of love life, a certain amount of effort will also be required during this time. Although you should not see any significant problems. Same as with the sphere of business, you are the one determining your further fate at this time. Roughly speaking, if you decide to leave your partner, this action may be the catalyst of you meeting your true soul mate in the future. Yes, the one. But of course, everything can develop quite differently and vice versa. Here the events will depend on particular circumstances. Therefore, care and common sense are needed like never before. To some extent, this will also apply to your friends, especially to your best friends. Carefully ponder about your situation repeatedly before making a decision. Maybe it is right now that you will be choosing with whom you go further in life. And probably it is unnecessary to clarify just how much can depend on your choices. So be extremely careful and cautious in your actions.