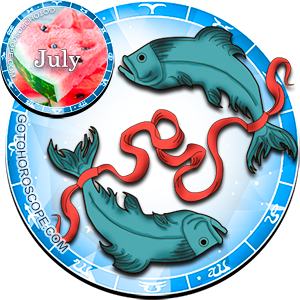 For the zodiac House of Pisces, traditionally closing the celestial band of the key constellations, July 2014 will not be a bad time. It is quite likely that throughout the direction of this month the Pisces will get very lucky a few times. In addition, there is a high possibility of a successful result from many ventures, planned for this current period. However, the representatives of this House may also face some problems. For example, the Pisces' surrounding may not adequately react to their quite objective actions. Or some misunderstandings may occur in terms of relationships with close ones. While no problems will have great magnitude individually, all together they are quite capable of running a Pisces' life. From the most significant enemies of the Pisces, only Mercury is notable. The ruler of the celestial trade routes, responsible for the "expulsion" of the Pisces, will focus its negativity on the area of entrepreneurship. Meanwhile, Venus, the planet-exalt of Pisces, and Jupiter, the planet-ruler of this House, will focus on the area of emotions. Sadly, there is a great possibility that the energy of the "celestial leader" of the Water trigon, Neptune, will be fully suppressed due to a high level of astral negativity.

In the end, speaking about the business sphere, we could say that to minimize the potential harm, the Pisces need to pay special attention to their own work throughout July 2014. Do not try to distinguish yourself or achieve some unique moments, you will not succeed; you will just try for nothing. At a minimum, just accept that not all your plans will come to pass. Also, consider the fact that you will not get absolute support from your loved ones. This will be compensated in turn by your luck. During the crucial moment, the external circumstances will fall in such a way that you will come out a winner even from the most critical situation. Do not doubt yourself, but keep track of your actions. Neptune recommends listening to your heart, not your mind. However, you should not forget that this planet will be fully blocked, so its advice is unlikely to be objective to you. All in all, you will be able to fulfill most of your goals in July if you will be persistent and unyielding. Do not try to chase all rabbits at once. Solve one problem after another and then you will be able to spread your resources productively and efficiently.

The love front will surprise you with far more exciting events, since this is where the maximum positive celestial energy will be focused upon. Venus, in tandem with Jupiter, guarantees a positive outcome out of any venture you plan, if it does not surpass the freedom of another person. In other words, you will undoubtedly reach all of your goals, but with a condition that you are not going to force others into anything. However, you can definitely convince someone of your point of view. The stars are once again on your side here. Your charisma and diplomatic talent will be unparalleled. You will understand that on the dawn of the first ten-day period, and once you do, you can confidently reach any height. Just be careful in your conversations with friends. Your success may unintentionally cause jealousy to rise. This will not bring any significant problems, but why do you need extra tension? Just try to avoid bragging of your success too much. In terms of your relationship with your loved one, be afraid of jealousy - but do not confine yourself with unnecessary binds. It is your life and you should live it according only to your own conscience.