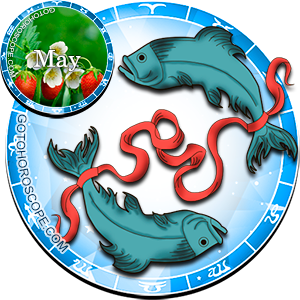 Pisces, the final zodiac sign of the Water trigon, in the beginning of May 2014 will be able to independently concentrate on the most prioritized directions. What is more important is that these directions selected by Pisces will be absolutely wrong. Sadly, but this fact is unarguable, since the reason for it will be the extremely powerful influence of Jupiter. In its usual position, Jupiter is the ruler of Pisces, but this month, due to some general combinations, he will change his tradition and use all of its strength, magnified by the solar negativity, against its earthly protege. Most likely the active negative energy of the mean Jupiter will be most effective against the ability of Pisces to adequately evaluate the surrounding environment. On the other side, the exalt of Pisces, the planet responsible for the development of the life forces of the representatives of this zodiac sign, Venus will work in close collaboration with Mercury. Like Jupiter, Mercury will replace his classical dispositions, and instead of being a negative planet responsible for the "expulsion" of Pisces, he will become a trusty ally. In addition, the "celestial leader" of the Water trigon, Saturn, will not leave the Pisces without his support. So you do not have to wait for serious problems to come from Jupiter.

Nevertheless, the sphere of entrepreneurship for the Pisces sign will not be as successful in May 2013, if the Pisces do not pay due attention to their current problems. So in the middle of the first ten-day period of the month, when you finally determine where the problematic wind is blowing from, you must quickly direct your working capacity towards not only eliminating the arguable moments, but also prepare the soil for the impossibility of these problems occurring again. In other words, in the first half of the month you must concentrate on the work as much as you can and solve all problems once and for all. Do not dedicate yourself fully to work, but do not leave arguable moments behind you either. While you may not be able to solve all problems, those that will be under your control will be solved forever. This will be the key to your further success. You should systemize your methodology and show your competitors what you are capable of.

In terms of the love front, then in the upcoming stage you must act more precisely and carefully. In your relationship with your lover, you must show as much patience as possible during the first ten-day period; do not argue under any circumstances. Trust me - this is the optimal solution as you will not be able to prove anything to her currently anyways. So do not waste your energy for nothing. Especially since the second ten-day period of May will be even more significant, since you will be able to use the maximum of your creative energy towards the prioritized directions. It is during this time that your relationship with friends and close ones will be in harmony (not without your careful participation), while your influence on your lover will be unbounded. This is when you should put her in the right direction. Do not be shy in expressing yourself, sometimes people need being put into their place. Perhaps it is better for this to be someone close, rather than someone unknown. At least then you can predict reactions and choose the more or less optimal ways of influence. Towards the end of the month, the many problems you have will finally leave you and you will have to just peacefully enjoy your well-deserved harmony.