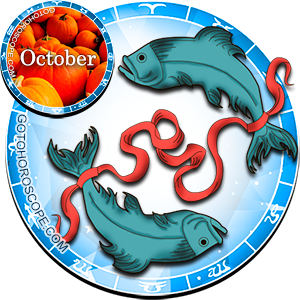 In October 2014, the zodiac House of Pisces will feel all the power of the positive star energy. The thing is that among the celestial bodies of the Solar System that are aggressive towards this House, only Saturn is notable. Yet this planet is the planet-ruler of Pisces, which undoubtedly has the most positive outcomes no matter what kind of negative scenario unfolds. In the current situation, it will guarantee stability. At the same time, Mercury - responsible for the "expulsion" of the Pisces, will synchronize its emanations with the astral flows of Venus, as a result of which the leader of the celestial trade routes will lose his entire negativity. Venus is not just the planet-exalt of the House of Pisces. The celestial priestess also plays the role of the "celestial leader" of the entire Water trigon. As a result, this month the Pisces will receive sufficiently strong allies, while their enemies are undoubtedly capable of breaking through such powerful blocks of positive energies. The uniquely positive fall of circumstances will lead to that the many problems that has previously seemed seriously to the Pisces, will in reality end up being trifles, not even worth exclusive attention. Such understanding will determine the possibility of using the life forces of Pisces in truly important areas.

The work area will provide joy to the Pisces in October 2014 with new victories and quite positive events. This month you will be suddenly invited to a plethora of all kinds of corporate events and official celebrations. Even if the event does not promise anything exclusively positive and does not touch upon your interests in any way, visit it anyways. There is a high probability that the accidental acquaintances will be very beneficial for you. It is not only the mercantilism and the greed will provide events with a direction for potential development. You may meet very interesting people, which, perhaps, may radically change your views of live. The main thing is not to disassociate yourself from new influences. First try to understand them, and only later, if their postulates are in conflict with your core principles, only later it will be rational to deny potential movement in this direction. As for the rest, do not limit yourself. Choose any methods of influencing those around you and any methods of reaching the goals you have set. You will definitely attain your mission! Just try not to leave smoking ruins behind you.

Such a warning, by the way, is also relevant for the sphere of personal relationships. Everything will be just great with your lover. The ideal turn of events is a trip. It is best not just pick a trip on a seashore, but something like an excursion around multiple countries. You will receive a greater experience, which will provide an extra charge to your emotional energy. Currently it is the emotional flows that will define your development. The more you live through during the first two ten-day periods, the brighter and more active your creative base will be at the end of the month. If you write poems or draw pictures, then prepare to create a masterpiece. If you do not have special gravity to art, then think - maybe you should try it? October 2014 is an ideal time for it. The friends will support you in everything you do. Your close ones will be fully on your side. The main thing is to move to the planned goal, while being especially careful with the surrounding world, as it is quite fragile when in your hands is such power.