Creativity can be a blessing and a curse. While most people would assume it's all joy and rainbows to be a creative force, you, Pisces, know that with creativity comes feeling like an outsider. When you tell the world things they've never heard before, that world doesn't always embrace you with open arms. In fact, you have often been seen as a freak and a crazy person because of this. This November, however, is your time to let your proverbial freak flag fly. While creative people are sometimes seen as freaks at first, they are sometimes retroactively seen as soothsayers.
The planet Uranus is going to be following Pisces very closely this month. What will that mean for you here on Earth? It means there's a lot of celestial force raining down around you, Pisces. It also means you've got a big planetary bodyguard who is keeping an eye on you. It's a good reason to take a few more chances than you usually do.

Work is going to have an odd dynamic with you this month, Pisces. Your workplace (or just your immediate supervisor) will be in a position to offer you a challenging role that's entirely voluntary. By all means: take it, even if you don't see an immediate connection to you and your life direction. This is going to come up for you earlier in the month as part of that union with Uranus we mentioned. Mercury is going to be directly opposite Uranus early in the month, which means a number of work-related obstacles are going to be cleared away for you. What does that mean as far as that offered up a challenging role? Well, other things are going to be a bit easier for you, Pisces, so this is the time to step up. People might be looking at you to fail. Think of this as that soothsayer role: you will be the vanguard at your workplace by being the first one to face these challenges.

Your finances are going to be affected by these same forces, with the syncing of Mercury and Uranus on the 7th creating a big node of influence in your life. Granted, "Node of Influence" is a pretty vague term. In this case, think of it as a tentpole, holding up a bunch of activity. The 7th is going to be the peak of whatever that activity is, with it trailing off as the month continues. It could be a financial panic or it could be that you win the lottery. The thing to pay attention to is anything unusual with your money and global finances in general. Don't do anything crazy like socking your money into your mattress or anything like that, but keep your eyes open. The potential is there to either make a nice small fortune or avoid a huge disaster.
Venus is going to be perfectly opposite from Uranus early in the month That's a bit of influential synchronicity right there and the effect it will have on Pisces is huge. Venus, of course, has a huge influence on the forces of love, romance, and your love life in general. Look for interesting developments in that department on or around the 12th. If you're in a relationship, that could mean a significant decision has been reached by you or your partner. If you're dating and looking, pay close attention to your interpersonal interaction around that date. We're not saying you're going to meet the person of your dreams (necessarily), but someone is going to appear that will be a powerful force in your love life, whether romantic or platonic. They're going to be drawn to that creativity of yours. Don't dampen it down.

We live in the most technologically sophisticated time in human history, and yet we're in the worst health that we've ever been. Why is that? Because we don't stay active. Pisces, this is the month where you have to pay the new year's resolution bill and get to work. Time to level up and get moving. If you're already pretty active, this is the perfect time to look for an alternative exercise. Not that anything was wrong with the soccer team you play with, but this is the month to also investigate lacrosse. If ever there was a month to move your body, do it in November, Pisces.
You are the soothsayer this coming month, Pisces. You will take that burden and make it a great responsibility. The rewards for you - although it might be some time before they appear - will be tremendous. 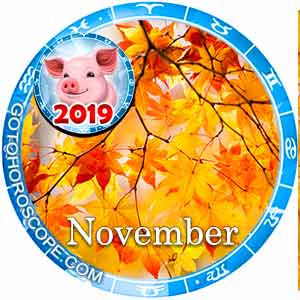