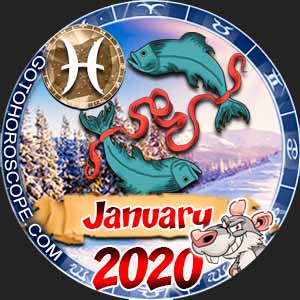 Mars and Neptune began casting their shadows on you in December and the effect of that is going to linger on you through January. What does this mean for you, Pisces? It means you're going to have a bit of a push at your back, helping move you along when maybe you're less inclined to do so. That won't just help you with things you want, but also with some things that you're a little afraid of. January might feel a little bit like a sled going down a hill: starting off slow, but then picking up speed gradually. You may think: if it's that scary, why am I doing it? Well if you've ever been on a fun sled run, you know the answer already.

The first week of the month is when you're going to confront directly something you've been dreading for a while. This could be at any scale: doctor's visit you've been putting off, a bill you've needed to pay, a conversation you've been dreading, or just a simple lightbulb you need to replace. It doesn't matter how big or small someone else thinks it is. It's a big thing for you and you're going to deal with it. This might take some revving up on your part to get your courage up. That's okay. What's important is that you face it and move on from there.

You haven't known what to do about a job for a while, Pisces. Sure, you've stayed employed and your employers have always liked you. But there's never been a job that particularly sits well with you. Maybe you've started to wonder if you're cut out for being employed. вЂ¦. Whether jobs are just always going to be drudgery. Keep your eyes open around the 6th of January for some signs to point you in a new direction. This probably won't be a "HELP WANTED" sign beating you over the head (but it could be). It will more likely be something that's been in front of your nose for a while, all of a sudden looking very attractive and lucrative. This might be a possible new career for you to pursue or it might just be an idea to pursue, a new way to think about earning a living. Remember: not everyone follows the traditional 9 to 5 path. You might just need to rethink what a job means. Keep your mind open and by the end of the month, you will have some interesting leads to pursue.

The people around you have wanted to make your life easier for a long, long time, Pisces. They've seen you making life harder for itself than it needs to be. This is the Pisces way and there's very little that would dissuade you from it. You might just as well try to convince the sun to not shine. So while you aren't going to change your ways, you do have the option to listen to the people around you who at least want to lighten your load some. And January is when you're going to start doing just that. No one wants to change who you are, but they do want you to get out of your own way. Listen to what people are saying around the 16th or so, especially when it comes to the way you treat yourself. You've dismissed that sort of talk before, but this is the time - at least on this date - you're going to stop and pay attention to what people are saying. And if no one is reaching out to you, you need to make it a point (and this is going to be a challenge) to call some people up by the 20th and set up a time for an honest heart to heart. You're going to ask them what you can do better in your life and you're going to listen to the answers you get. They will no doubt surprise you.

As you prepare to go into February, know that the planets will be looking down on you with great scrutiny then. After all, that is your month and the universe will be expecting great things from you. You have that great potential inside you when you let yourself. So do.