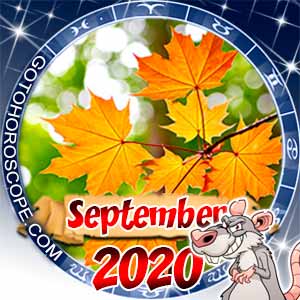 September begins with 50% of the planets in retrograde, so momentum has slowed to a crawl. With Saturn’s multiple hard aspects to the lunar nodes and the moon, what our heart wants is clashing with our ingrained conditioning – all the societal norms we were taught from childhood. We need to scale back and embrace our limitations so we can accept the reality of sacrifice, discipline, and responsibility. Above all, acting cautiously is important this September, and we’ll all need to take extra precautions after when Mars joins the retrograde parade on the 9th. Fortunately, Jupiter the planet of luck and progress stations direct mid-month, gifting us some forward movement in pragmatic committed Capricorn. All September, we attract good fortune when we take an organized and direct approach rooted in ethics and integrity.

It will be a challenge to remain grounded as we enter September. With a Full Moon in boundless Pisces on the 2nd, we start the month in an emotional sea-storm that shines a light on the depths of our intuition. And this storm brings lightning thanks to the moon’s sextile to Uranus – the planet of surprise and rebellion. Artistic creativity is at a surreal all-time high, but so is the risk of delusion and unobtainable ideals.

Mercury enters Libra just a few days later to bring us more rational and diplomatic ways of communicating. From the 5th until early next month, we want to consider all sides of the discussion so we can arrive at fair conclusions.

After Venus enters Leo on the 6th, we feed on adoration, validation, and attention. Just watch the ego and the extravagance.

Of course, we can be extravagant in a deeper, truer sense of the word when Mars is in Retrograde. When the warrior planet of action and desire stations Rx on the 9th, we’re in for 8-10 weeks of heroic opportunities. This transit takes place in Mars’ home sign Aries, so we’re likely to face a discouraging lack of ambition and pitiful sex drive, but we’ll each have plenty of time for some internal battles.

Once we make it through the combat zone, we’ll see that we are never incomplete and never less than whole.

If you’re planning on asking for a raise or considering making an investment, shoot for some time after September 12th. Jupiter stations direct in Capricorn this day, bringing real rewards to long-standing commitments and step-by-step approaches. Dump the unrealistic goals and be aware of your own position on the professional playing field – astute, sophisticated, and observant. With Jupiter in Capricorn, we laser in on the corruption of our foundations and rework the schematics of our empires.

This attention to detail is magnified again on the 17th when the New Moon in Virgo hands us a clean slate. If we’ve let things like bills, paperwork, or laundry fall to the wayside, this is the perfect time to tackle the chaos and commit to ordering. We’ll have an eye for problematic situations and unnecessary clutter over the next six months, so explore the relief of delicately cutting out the fluff.

It’s almost as if we can sense the path beyond our current path – but we will only get there if we take things step by step.

Commitment is key in marriage and partnerships around the 20th when Juno enters Scorpio. How far are you willing to go for your partnerships?

Gracefully, the Sun enters balanced Libra on the 22nd to infuse the world with harmony, art, and beauty. This is a great transit for the collective because Libra is such a social sign, but it’s also amazing for our personal lives because it brings a touch of diplomacy and negotiation to the forefront. The day the Sun enters Libra is the most balanced day for a reason, and we’re all invited to take part in the calming symmetry.

Not even a week later, though, Mercury plunges into Scorpio where he’ll be working on communicating hard truths. Sex, death, power imbalances, unpaid debts, and messy secrets are all fair game while the messenger planet reports on the tumultuous waters.

Scorpio also rules transformation and rebirth, so we’ll each get a couple of weeks to really reset how we speak to others and how we interpret or mentally organize external stimuli.

Ending on a great note, September’s last astrological event is Saturn’s direct station in Capricorn. It’s time to get back to our goals after months of “stalled engine syndrome.” Be warned: the rest of the year is going to require a lot of hard work!

September really is a fantastic month, at least once we reach the midway point. After Jupiter and Saturn station direct, there are unmatchable rewards coming in for everyone who’s been putting in an effort this year, and those blessings will keep raining down even as we enter October.