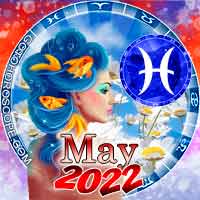 May of 2022 is going to be a busy month for Pisces. The planets are aligning to help you set yourself on a path to personal growth. The beginning of the month gives you the insights and tools needed to look within yourself and remove any obstacles that are hindering your success. The middle of the month will be fraught with emotions and self-doubt, but if you can push past this and remain true to yourself, the end of the month has some powerful allies waiting to help you on your personal journey.

This May starts off quietly for Pisces, with no significant celestial events affecting them until the retrograde on the 10th. On May 10th, Mercury re-enters his retrograde, where he will stay until the first week in June. No one enjoys these times of misunderstandings and unnecessary disagreements, but sensitive Pisces especially dread them. It is hard for you not to take people's words to heart or spend time contemplating if they meant something deeper than what they said. Try not to get into your own head and hurt your own feelings during this retrograde. Take things with a grain of salt and do your best to let words that seem harsher than usual roll off your scales.

On May 15th, your ruler Neptune enters into Pisces' first major aspect of the month when he forms a sextile bond with the Sun. With the Sun shining its light directly into Neptune's dreamy depths, you will feel like you can see clearly through the intentions and emotions behind actions. During this bond, Neptune is inhabiting your 4th house, meaning that this sextile will shed some much-needed light on your own habits and how you formed them. The 4th house rules our home life and our personal history, meaning that this sextile is more about yourself than those around you. This aspect may shine a light on some areas or behaviors that you would instead leave buried, but doing so would be foolish. Take advantage of Neptune's clear plans and the Sun's positive energy to make some positive changes in yourself.

Following close on the heels of this possibly emotional sextile is the definitely passionate Flower Moon. May's Full Moon lands on the 16 in Scorpio. Not only is this Moon in the moodiest of all signs, but she is also bringing a total lunar eclipse with her. This will be a time of high emotions for everyone, and for sensitive Pisces who are still dealing with some personal revelations, this Moon may feel overwhelming.

Two days after the Full Moon, on May 18th, Neptune enters into conjunction with assertive Mars, which can be a trying aspect. Gentle Pisces do not mesh well with Mars's aggressive energy, making you feel down and unmotivated. With Neptune currently sitting in your 10th house, which rules achievement and long-term goals, you may feel like you are in a rut. Projects and plans might not be progressing as quickly or as smoothly as you would hope, and this conjunction brings those feelings of frustration to the surface. Instead of giving in to despair or giving up on things you have already put a lot of time and effort into, take a step back and recognize these negative feelings for what they are. This conjunction only lasts a short while, and then you will be back to feeling like yourself.

Neptune has no other significant interactions in May, but Pisces would be wise also to watch the comings and goings of Jupiter. In ancient times, before the discovery of Neptune, Jupiter was the ruler of Pisces, and he still has some influence over your horoscope.

May 20th sees Jupiter enter into a positive sextile bond with Mercury. This relationship will have Pisces feeling sure of themselves once more. Discard the negative feelings left over from Neptune and Mars and look towards your future. Mercury helps to plot a path forward, and Jupiter dares you to take the steps necessary to see this journey through. If you have been considering a change in your career or turning a hobby into a money-making endeavor, now would be an excellent time to lay the foundations.

On May 29th, Mars re-enters your sphere, this time by forming a conjunction with Jupiter. However, this pairing has the opposite energy from that of Mars/Neptune. When confident Mars teams up with mighty Jupiter, and both are in the 8th house of bold Aries, those in their shadows feel like they can take on anything. This powerful duo will give you the extra boost needed to keep you moving down the path that Mercury set you on last week. Don't squander this energetic boost.