Or read general April 2023 Horoscope for a month ahead 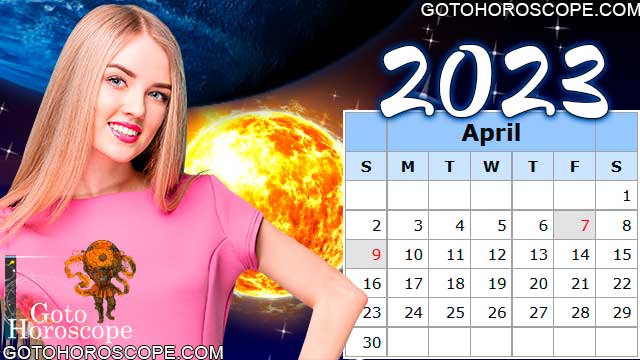 April 2023 will be the time for change! With the advent of spring, we are rebuilding and preparing to meet the new season. The trees are covered with foliage, and the new agricultural season begins on the fields. The crucial point starts at the end of March when the Sun moves into Aries, thereby giving rise to a new zodiac cycle, the beginning of which takes place under the auspices of the energetic god of war Mars, who in the old days (during the Roman Empire) was also considered the god of agriculture. One way or another, in April 2023, the furious energy of Aries and Mars will prevail, and various aspects of life, closely intertwined between them and the positions of other planets, will begin to prepare us for a new period, adjusting our capabilities and preferences. Whatever happens at the beginning of the month, this is only preparation, and the main battle is scheduled for the last decade of April. At this time, not only various planetary aspects are scheduled but also the New Moon, as well as the beginning of the period of Mercury retrograde.

The first and second weeks of the month will be marked by the Full Moon in the sign of Libra on April 6, 2023, thus summing up the period of completion of recent projects or just any undertakings at the household level. In other words, at the beginning of the month, you should not grab onto new things that will be helpfully offered to you, even if they insist on their incredible benefits. If you don’t have an extra pair of hands to help you get here and there, then first of all try to complete what is already in development. There will be a better time for new projects, and in early April, promiscuous business politics and extra worries can be potentially dangerous. Only in one case can you ignore this advice: if you feel that your soul is predisposed to a new proposal, if you not only like it but are eager to start what is offered to you. The stars still advise you to listen to your heart, and if it tells you that the matter is worthwhile, then go ahead and act, even if all circumstances are against it.

Mid-April 2023 does not differ dramatically from the beginning of the month. This is still a rather dynamic period in which we have a lot to do while staying on schedule. And yet, by the end of the period, the transition from issues of a purely business nature to matters of the heart will become more clearly felt, and the importance of issues of social structure within various social groups will increase. In married couples and romantic relationships, the emphasis can shift towards the personal interests of one of the partners, with a total misunderstanding or rejection of them by the other side. Spring is here, and at this time feelings and emotions are more tense than at any other time of the year, so quarrels and resentments will be common this month. And yet, because love is not a linear, multifaceted feeling, it is often said that the mind cannot understand it. It is highly likely that in the second decade of April, due to quarrels and quarrels, many couples will get closer simply because, thanks to such events, they will penetrate into the depths of the soul of their partner.

In the last part of the third and fourth weeks of April 2023, we can expect an increase in the dynamics of the development of events, but not immediately, but closer to the last days of the month. Together with the New Moon in Aries, it will be possible to boldly take on new projects and proceed with the plans. Older people should take care of their health and be more careful. On the contrary, it is not recommended that young people, especially those who are free and looking for love, sit within four walls. If you only assume, then the stars indicate that if there is a most successful moment for finding the second half, then it will come precisely during this period of the month. For family people, this is not a completely calm time. There may be a conflict between the older and younger generations; there may be difficulties with grandparents, etc. In other words, misunderstandings between spouses may not be the worst option. In general, April 2023 will require concentration and perseverance from everyone, especially in the last days of the month.