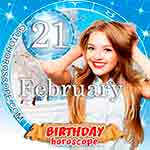 People born specifically on the 21st of February are believed to be creatively resourceful and charming and dreamy like a typical Piscean fish. The ruling astrological planet for this particular day is Jupiter creating your wonderful expressiveness, enthusiasm and sociability. If you have this birthday your temperament is imaginative, compassionate and easygoing and is combined with a strong will and a responsible attitude. You are clever, adaptable, ambitious and hardworking and usually have a quick witted sense of humor. Individuals with a February the twenty first birthday are sensitive souls who tend to crave attention, love and companionship in large quantities. This makes you very lovable but it can also cause you to be emotionally demanding and find criticism hard to take. Your willfulness, intelligence and natural optimism helps balance your emotions making you sometimes not really as dependent underneath as you present yourself.

Career paths are usually easily decided to a person born on the twenty first of February as your ambition drives you. Your versatility and logical approach to tasks makes you good at managing and allows you to take your pick of occupations. Although you like to be able to afford the good things in life a job's pay is often secondary to its interest and satisfaction. Individuals with this particular birth date are fairly adept at handling their finances. You keep a careful eye on your incomings without being too much of a penny pincher and will rarely borrow unless absolutely necessary.

For a Pisces, the person born on the twenty first day of February is untypically quite sociable, witty and not at all shy. When it comes to love and romance you are eager, but not in a rush, to find your fated soul mate. A partner must share your moral and ethical principles, be on the same intellectual level and provide you with the high degree of commitment and intense loyalty that you seek. You are ordinarily unlikely to commit to anyone to satisfy your craving for affection who does not fit these idealistic criteria. In a long term personal relationship you are a sensual, devoted charmer who loves with their body and mind. Your expressive warmth, openness and empathic nature helps you be an attentive partner and a best friend rolled into one. Once committed to someone you will more often than not give your all.

Any ill health episodes experienced by those born on February 21st are inclined to have a stress connection. Your emotions are strong but they can be hypersensitive, especially if you are criticized, provoking you to bottle things up. This anxious state can have an impact on your healthiness that may be alleviated by moderate exercise. Keeping your diet as healthy as possible is also important if you want to prevent your proneness to dips in your energy. Making an effort with your basic bodily needs and finding some pampering time will lessen the chances of getting stressed.

The primary strengths in your unique character are in your emotional deepness, self awareness and honesty. These personality features and your resourcefulness are part of your appeal and popularity as a great loyal caring friend. On the negative side personality weaknesses for those born on February 21st mostly focus on your self involvement. Sometimes you can appear to be rather wrapped up in your own thoughts and come across as detached and moody. This uncharacteristic behavior is considered usual to family and close friends but may come as a surprise to others less used to it.

Being born on the 21st of February generally directs you to be somewhat motivated but not driven by goals. You may set yourself some vague aims for your future based on career success but are not too disappointed if you don't fulfill them all. Your greater wish is to be successful in satisfying your longing to be loved and appreciated. A vivid imagination supplies you with lots of scope for your dreams and sees you wishing for a life filled with opportunities to see and do lots of different things. Your exuberant approach and your responsive assertive outlook assist you to actualize many of your wishes.

As you were born on the twenty first day of the month your date of birth adds up to a Root number of Three. As a numerical reference to your birthday it has the keyword 'Innovation' and highlights your creative intelligent adaptability. In the Major Arcana the 21st Tarot card depicting the World is the one most associated with your birthday. It is the final card in the deck and emphasizes your desire for fulfillment and a feeling of oneness with another. For February the twenty first birthdays the luckiest gemstone is considered to be the Amethyst, to be worn for increased intuition and wealth.

Piscean personalities are thought to be mainly astrologically influenced by the planetary power of Neptune. The actual day you were born on, the twenty first of February is assumed to be cosmically governed by Jupiter's influence. So your individuality is determined by both these celestial bodies generating the noticeable differences from others within your zodiacal group. Your conscientiousness and creativity are two of your best assets to utilize when striving for any type of achievement delayed only by your tendency to become preoccupied. The friendly fun loving characteristics you own need to be regularly encouraged in order to surface and combat your vulnerability to become tense easily. A finishing thought for people born on February the 21st is to try directing your thoughtfulness towards yourself once in a while and attempt to not feel guilty about doing so.