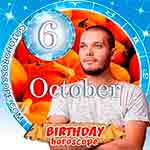 People born specifically on the 6th of October are imagined to be a tad idealistic with high expectations and with the typical Libran low tolerance of unfairness. The ruling astrological planet for this particular day is Venus enhancing your natural affability and guiding you to greatly appreciate harmony and beauty in your surroundings. If you have this birthday your naturally cooperative temperament is also very persuasive and sociable, usually with a dislike of being alone. Your warm, considerate and communicative spirit is loyal and fun with a passion for the debating of topical interests and views. You are inclined to possess a creative dreamy imagination and usually be a bit of an entertainer who loves an audience. Individuals with an October the sixth birthday are fairly optimistic with a tendency to pay close attention to detail and plans. You seem to enjoy living life to the fullest and improving everything but when you are feeling insecure your manner may change to be quite cautious and aloof.

A career in the arts is often a favorite profession choice to a person born on the sixth of October due to your imaginative streak and appreciation of beautiful things. Your high levels of friendliness and sociability make you a real people person who usually gains lots of satisfaction from working helping others in any capacity. Your strong sense of justice can encourage jobs involving law to be another popular work option. Your sharp awareness of fine details means you will ordinarily check all financial matters twice. This double checking of figures and contracts means it is rare for you to get into many troubles financially.

For a Libra, the person born on the sixth day of October is typically driven by idealism and a need for togetherness when it comes to romance. This drives your craving for emotional stability and normally makes you very romantic and likely to wish to be really swept off your feet. If a partner can get past your slight caution emotionally they are sure to gain an affectionate truly devoted companion who is capable of loving unconditionally. You will often utilize your diplomacy and charm to get your own way but your touch of indecision may irritate a loved one. Your willingness to compromise will help to make a long term soul mate relationship happy and successful. In the bedroom you tend to adopt an unselfish laid back attitude and a passionate allure making you a sensual, lusty and exciting lover.

Although you seem to as a rule take good care of your basic physical health, nervous disorders can sometimes be commonly experienced by those born on October 6th. Unfulfillment or imbalance in any area of life could provoke this potential proneness for anxiety or tension related symptoms or illness. Exercise is often an excellent method for combating feeling blue, it should help lift and improve mood as well as general all over healthiness. Eating healthily and regularly has equal importance to the maintenance of your vitality. People born on this day are also advised to beware of excesses in anything in order to preserve their usual wellness.

Your main strengths of character are exposed within your cheery cooperation, persuasiveness and likelihood to plan ahead. These positive traits can make you destined to do well in life. Along with your adventurous vivacious side they enhance and emphasize your amiability and heightened ability to socialize. The negative personality weaknesses for those born on October 6th can be frequently initiated by something or somebody being unfair in their judgment. This negativity may manifest itself as increased aloofness or hesitancy in addition to evoking the tendencies of displaying quite untypical self absorbed or temperamental behaviors.

Being born on the 6th of October means you will usually aim to direct plenty of positivity into everything you attempt to do. You are likely to be keen to opt for any challenge or possible achievement that involves bringing harmony to the lives of others. The less selfish a goal is the more you seem to find it easier and quicker to achieve. The usual expectant outlook you have offers strong motivation in the pursuit of any desired ambitions. When you dream it will usually consist of envisioning scenarios of accomplishing and acquiring some of the things that you believe will give you a feeling of true contentment.

As you were born on the sixth day of the month your date of birth generates a linked natal Root number of Six. This numerical reference to your birthday has the keyword 'Social' identifying your friendly warmth and agreeability plus your passionate ability to debate and skillfully express your emotions and viewpoints. In the Major Arcana Tarot deck the 6th card symbolizing the Lovers is associated with your birthday. This reflects your enthusiasm along with your high hopes for the future and dependable spirit. The lucky gemstone for October the sixth birthdays is Turquoise to be worn for the attraction of serenity and favorable fortunes.

The celestial body Venus's influential power is thought responsible for the probabilities of all typified Libra personalities. The actual day you were born on, the sixth of October is governed by this same planet's authority intensifying your accommodating degrees of helpful kindness characteristic of this zodiac sign. Your craving for harmonious environments, sense of loyalty and pleasant manner make you extremely nice to know. If you can tame reactions to injustice it will leave you clearheaded enough to articulate your displeasure more effectively. A finishing thought for people born on October the 6th is to try and not overlook the simple things in life as they are likely to bring you the most pleasure.

Best traits and more kinder times... when THEY are Happiest completely.. all forms.. SO...make em happier... all ways...and if not.. Yikes! horrible..stan back..watch out.. temper tantrums...lol..
Their legendary sudden swift anger spells from not being equal also can cause opposites actions,too...caring people and SO social.. Libra Male's though.. Nice firm sexy butts and their smiles can even charm the most dangerous snake. Ladies Libra's a have their own charisma and eyes dance around singing to you when they enjoy your company..

One trait... Sensitive wishy washy, or full-filled creatures.. Yes... truly .. Open emotional hearts upon sleeves, if not learned young to hide their affections well.
Most can shake a tail feather and move, plus are good in the sack... (sorry to the Parent's reading.)
. They enjoy test driving relationships...Like fast or classic beauties... Car's! Just trying harder myself to stop doing that and more hugs aka ego swallowing when bicker matches.. the emotional distance for sucking up personal time I grasp.. I do myself.. hide away at times for a break from our kids and him, yet he prolongs than he should for his reasons and that is unfair.. Unjust. So, overall.. You guys rock!! DO adore the talents, painting, creating, tech savy Libra's I've known and many in Authority legal jobs.. he was until recently for a better door that opened. He writes-when his truest of heart set free the most sweetly heartfelt kind gorgeous sweeping me off my feet cute poems and we both enjoy cooking, too..
word also... grass is not always greener on the other side either.. so, full image consider FIRST, before avoiding... why they call finally after weeks/months ect.. society apperance.
TARBaby 2017-10-06 22:31:11
0
I'm not born on the 6th but shutting down to recharge our batteries is an overall Libra thing. First, much activity no matter what it is zaps our energy. Sometimes I can barely talk. Something happens on the inside that just stops the Will from doing anything. I don't see how it's controllable. Second, negative energy makes us want to war for what's right but again, we need to recharge.

Standing up for ourselves is not so important because taking one on the chin for others is what we would rather spend our energy on. As long as our environment is upbeat and serene we can stay charged.

Libras are not wishy-washy. This world's system and all of the reality proves too much to care for at times. Like, what do you want to eat? What color do you want the front door? How about food that is energizing, simple, and different for a change and a color that is welcoming. I don't care! Pick one!! That's not wishy-washy, that's just borderline boredom because you ask the same question three times a day, every day and you make things that seem irrelevant to be important.

We could be extremely wealthy but it's irrelevant for us. Money isn't a priority over enjoying life. If your fulfillment in life is having lots of money then don't marry a Libra. We are practical. We like to hold strong ethical beliefs and live within them. If we see money as a problem, we will steer clear of having a lot.