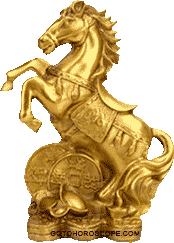 The seventh animal who arrived was the physically active Horse.

The horse personality is often willing to give as well as expecting a lot of liberty. These people are extremely independent and confident. The horse person is very quick-witted and is right in there with you before you have had a chance to finish what you are saying: he's on to the thought in your mind even before you've expressed it. In general, these people are gifted. But in truth, they are often more cunning than intelligent - and they surely know that. They adore being in the center of everyone's attention, but more they like to be recognized for their skills and are easily flattered. On the other hand, these people have an honest and genuine warmth which attracts lots of people and helps them make new friends. People, as a rule, confide in horse person because he/she is sincerely interested in their thoughts and feelings and is able to help with both a wise words and an action, but there is a small problem about it - the horse person is so excited by new discoveries that it is difficult for them to keep a secret. This is not something that arises out of malice or revenge - sometimes they just cannot help themselves.

It is easy to inspire such a person by new ideas and he/she tends to act on them without delay, carried away by the excitement of the moment. But it is also important to remember that there is a danger for a horse person to be too impulsive and it may cause some problems in the future. And if they do not see the result of their efforts, it is rather natural for them to turn their attention to a new project and head off once again, brimming with new ideas. The horse person is always ready to offer good advice and can be very persuasive, but his/her confident and carefree approach hides inner doubts. Those who know such a person will recognize this, and offer the support and reassurance he/she needs.

Generally, people who were born the year of the horse have many contradictions in their character. Horse type people are proud yet sweet-natured, arrogant yet oddly modest in their approach to love, envious but tolerant, conceited yet humble. They want to belong, yet they are burdened by their need for independence. They need love and crave intimacy yet often feel cornered, pressured. But the truth is the horse person is an individual, who depends only on his/her wits and his/her labor to get what he/she wants.

A person born in the year of the horse is usually an emotional adventurer and spends much of his/her time falling in and out of love. This charmer is never short of people who will succumb to their physical appeal, but since he/she likes the easy conquest, they lose interest quickly if their interest is not returned immediately. (So famous is the fickleness of this sign that the Chinese, for example, believe that women born in the Year of the Horse will not make good wives.)

If your beloved was born in the year of the horse, your relationships are not likely to be boring - there will be impetuous moments but there will also be exhilarating and intimate times. Sometimes it is hard for a horse person to quieten down and focus on one partner, but in case he/she manages to overcome his/her initial hesitancy it is possible for him/her to take commitments seriously. It is not too difficult to charm horse people by tenderness and affection.

Consequently, the horse type must learn to step carefully where matters of the heart are concerned and will no doubt be much better at relationships once he/she had a chance to mature and gain experience. There is also a lot depends on the partner, who theoretically mustn't object to him/her spending time grooming him/herself, making sure that hair and clothes are just right for the occasion. On the other hand, the horse type person is often disorderly creature when it comes to domestic affairs, but usually, this side of his/her nature becomes insignificant because he/she is a loving and spirited partner.

Usually, people born in this year make unconventional and very active business partners. Should they identify a goal, they channel all their energies and use their productive imagination to achieve it. But they should keep in mind that not everyone agrees with their methods. In case a horse person decides to master a new skill in order to further his/her career, it is a usual thing for him/her to persevere in learning until he/she has perfected it. Horse person will usually try to resolve any problems rather than simply avoid them.

People born in the year of the horse are comfortable taking calculated risks but can often make promises recklessly. So a good partner must show him/her the advantage of being more reserved, hedging bets and give special care to details, contracts and business commitments. Many people born in the year of the horse have a healthy constitution and are suited to mentally or physically demanding work. The horse person certainly has a necessary potential to be an inspiring leader but he/she should learn to hold back when situations are uncontrollable since a hasty word could land him/her in trouble.

👷 Ideal professions for the Horse Include:

Negative:The Horse can also be defiant, condescending, unscrupulous, anxious, moody, excessively pragmatic, opportunistic, hard-nosed, self-serving and so obtuse as to seem to have gone both blind and deaf at once.

The 2026 Chinese Year is the 43 number in the sixty-year cycle called PING WU and described in Chinese tradition like "Horse on the Way". 2026 is the year of Red Fire Horse. The upcoming compassionate 2026 year of the Horse is going to be attentive to all our troubles and quick to react in the protection of those who cannot fight for themselves. The optimistic nature of 2026 allows us to cope with financial hardships in the belief that good fortune will soon be on the way, while kind-hearted nature of the 2026 year provides us with supportive friends, ready to help us in difficulties just as we have helped them.