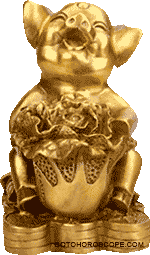 The twelfth animal who arrived was the meticulous and resigned Pig.

The Pig type is usually an honest, straightforward and patient person. Such man is a modest, shy character who prefers to work quietly behind the scenes and when others disappear he/she is often there to offer support. This type of people is reserved with those who they know not too well, but as time passes and they gain confidence, those around may discover a lively and warm-hearted person behind that mask of aloofness. In spite the fact that those who born in the year of Pig have a wide circle of friends and acquaintances, they have only a few close friends who understand them and share their inner thoughts and feelings. It is easy to put trust in Pig type; he/she won't let you down and will never even try to. Such people simply want to do everything right according to the social protocol.

It is important to remember that these people are not vengeful creatures and if someone has tried to take and advantage of them, the Pig type tend to withdraw to reflect on the problem and protect themselves. All they need in such situation is only a little time to find a constructive way to respond. The people of the Pig type are conservative creatures of habit. They dislike being made to travel too far from familiar surroundings unless it is a trip to the country. They love nature and are never happier than when they are out somewhere, far from the city.

On the other hand, there is a tolerant and peaceful side to their character. Such people are never afraid to allow others their freedom of expression; they do not want to cause any argument and if there is any chance to avoid arguing they probably will take this occasion. They are not weak, however, and if the situation causes them to fight, these people will rise to the occasion, whether it is to defend themselves or to defend those closest to them. People of the Pig type are the ones who everyone admires most. Everyone can make a list of the Pigs in their life: aren't they the nicest, most loving and scrupulously caring people around?

There is a prevailing view that people of this type are dreamers, and at times they certainly are, but it is important to remember that they are also sharp enough to realize what is going on. Their reputation is important to them, and although these people are happy to be the target of gentle jokes, there is always a possibility hurt them when someone is trying unjustly accuses them or is behaving in a way that is openly vindictive.

Generally, no matter how old they get, Pig people still only see and believe that all men/women are basically good. Pig people constantly sacrifice their own happiness and comfort for the sake of their close friends.

Though they need to experiment and discover romance before they can be sure that they have found the right partner, pig people are sensitive, sweet but naive, and caring. They are romantic and certainly the marriage-type. There may be a big problem for them because people of this type usually tend to put all their trust in relationships, and some partners may take an advantage of this apparent naivety. But we certainly can say that these creatures are also good learners and have the will to pick themselves up and start again.

These are tolerant people and will allow their partner the freedom that they also need, but this has to rest on an affectionate and trustworthy footing. In case a relationship is established, the pig people rely on the fact that the love and affection they give will be returned. But it is also very important to remember that the partner should also be careful not to continually demand the pig type people's emotional attention in case he/she feels trapped.

The Pig is a splendid companion. If you have a lifetime Pig friend, don't think that your worries are over. Pigs are loyal, faithful and giving - only as long as they approve of you. In order to keep your lifetime Piggy friend, remember, never try to force your opinions on a Pig - a Pig rarely asks for help and cannot graciously accept it.

Power is not really on their agenda, and it is rare for them to back-stab or betray a colleague. Such people are naturally hard-working and try to approach tasks seriously and efficiently.

People of this type are likely to assess how much work is ahead of them and then take it step by step, progressing slowly but surely. These people don't like to risk things and they tend to remain on the safe side. There is also a side to their character that needs human contact, and their patience and kindness are qualities ideal for caring careers.

👷 Ideal professions for the Pig Include:

The 2031 Chinese Year is the 36 number in the sixty-year cycle called CHI HAI Year and described in Chinese tradition like "Monastery Pig". The 2031 year of the Yellow Earth Pig has an optimistic and at the same time alert nature, but 2031 also has the confidence to carry us through the unexpected times. If we study closely the 2031 Pig Year characteristic properties it will be obvious that 2031 has the good fortune of being in the right place at the right time. Meaning that everyone can succeed in the 2031 Yellow Earth Pig year easily recognizing given opportunities and make the most out of them.