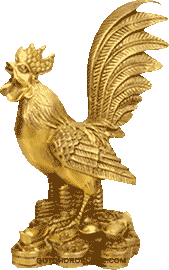 The tenth animal who arrived was the showy Rooster.

People born in the year of Rooster are usually very observant. Most of the time, they are very accurate and precise with their observation. These people certainly love finding themselves in the spotlight, they love entertaining friends and adore meeting new people; even unexpected and uncertain circumstances are not a barrier for them. It is almost impossible to find someone born in this year looking dowdy or untidy. The fact is that these people are usually one of the best dressed and groomed of all other people. They are actively interested in clothes, colors, and accessories, and usually are very critical about their own appearance as well as about appearance of those they are surrounded by. People born in the year of rooster like to be noticed and flattered. Such person might dress a little flashily with this in mind, but in his heart, he/she is completely conservative. Rooster types always appear attractive and beautifully turned out. They are sociable and love to receive attention. Others may criticize them for being exhibitionists, but the fact that they are compassionate, wise and have a brave nature which comes to the fore when others need their help, makes up that deficiency.

It is difficult for these people to accept advice because of their strong independent spirit. On the other hand, these people are often confident in their own judgments and choices, and it is not a problem for them to follow their own routine. There are times when these people may be too unbending and it can cause some problems in relationships with others. So it would be wise sometimes to not express their opinions in order to keep the peace.

Though sharp, practical and resourceful, the Rooster type also likes to dream. And because he/she likes to dream, he/she might be disappointed by the loved one, for the reality usually doesn't match up to the dreams. In fact, it is very important to remember that these people are often sincere about their dreams. Their close friends appreciate this sensitive and courageous side, but acquaintances are only likely to see it in times of crisis.

Usually, love for these people is another kind of responsibility and a real challenge.

Though there are likely to be many romantic opportunities in their life since people of rooster type enjoy courtship. This person will certainly be intense and very devoted to the loved ones. Moreover, as soon as he/she has such a good taste and loves good clothes, surroundings, and company, he/she will certainly be able to create a romantic atmosphere. In other words, these people have both the impressive appearance and outstanding mind.

There is a danger that such person fails to read people well and may be hurt when they disappointed in him/her or don't share his/her enthusiasm. It is very important to be blunt and specific with such people when it comes to affairs of the heart. On the other hand, in case the present relationships last too long and tend to lose its relish, the rooster type of people may decide to set off again in search of a new relationship. In case there is a romantic relationship, it is the female rather than the male rooster who usually keeps an eye on practicalities. As a rule, when it comes to long-term relationships, these people are reliable partners, and their roaming will cease when they meet someone they do not want to lose.

People born in the year of the rooster are often extremely conscious about clothing and appearance in general. They may appear conservative but are obsessed with their look - they can spend hours standing in front of the mirrors and will not even blink when they spend $500 for a dress. That doesn't mean they don't care about money, in fact, they love to compare prices and even if the bargain is only a few cents or dollars cheaper, they will be satisfied.

It would be worthless to try to push such person to make a decision. They are able to think clearly and logically and usually can't stand being put under pressure. If they are allowed to work without unnecessary challenges they are, as a rule, more than capable of achieving a good career. As long as this person has the time to think and the possibility to use his/her imagination, it is very likely they will produce profitable and creative ideas.

On the negative side, these people cannot tolerate opposing views or different ways of doing things. In case they are governed by other people there is always a danger that they will feel trapped, which may cause them to feel unstable and insecure or become over-critical. It is also very important to remember that when these people manage to achieve financial security, they should resist the temptation to spend their earnings quickly or carelessly. This is another point on their weak side, and such a person, whether male or female, should learn to handle his/her spending with the same steady approach he/she applies to work.

👷 Ideal professions for the Rooster Include:

The 2029 Chinese Year is the 46 number in the sixty-year cycle called CHI YU and described in Chinese tradition like "Rooster Announcing the Dawn". The 2029 year of the Yellow Earth Rooster is the meaningful and intelligent period that could grand us with clear picture of upcoming times.