High in the Himalaya mountains, the rich practice of Tibetan Buddhism over the centuries has developed the Mo Dice Divination system originally as a tool helping with meditation and reaching Nirvana.

It mixes Buddhist traditions with ancient Tibetan beliefs in spirits and deities, creating a rich religion with beautiful visual symbolism, a compelling pantheon, and rituals that appeal to followers far beyond the mountainous borders of Tibet. One of the most famous and commonly performed rituals is Mo divination.

Tibetans use Mo divination to ask questions about their health, their wealth, their family’s luck, and any other questions that are weighing on their lives. Traditionally, Tibetans have gone to respected religious leaders such as monks who would cast Mo dice for them, interpret the results, and recommend prayers and offerings to various gods in order to improve their situation. Now, with the proliferation of written guides such as this one, including books written by respected religious figures, practitioners can cast Mo dice at home.

Most often, Mo divination is done by casting two six-sided dice that are emblazoned with six syllables, “Ah Ra Pa Tsa Na Dhi.” These syllables come from the holy mantra of Manjushri, an important bodhisattva. In Buddhism, bodhisattvas are beings that could have attained enlightenment, but chose to delay their ascendance into Nirvana in order to help other human beings. Manjushri is one of the most powerful bodhisattvas and is associated with divine wisdom. Mo divination relies on his wisdom in order to allow practitioners to see the future by invoking his holy mantra. 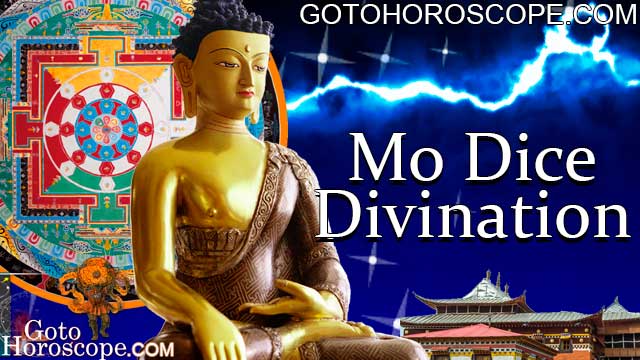 Depending on the combination and the orders of the different syllables, they will mean different things in terms of someone’s general fortune or a specific question that they have about an aspect of their life. These combinations will be explained further in their guide.

There are thirty-six Mo Dice combinations in total, corresponding to six domains for each Tibetan syllable.

The Flaming Rays of the Sun

The Nectar Rays of the Moon

The Ground of Gold

The Tone of Vajras

Adding Butter to the Burning Flames

The Demon of Death

The King of Power

The Door of Auspicious Visions

The Vase of Nectar

The Pool Without a Source of Water

The Ocean of Nectar

The Demon of Afflictions

The White Umbrella of Good Fortune

The Streamer of Fame

The Mara Demon of the Aggregates

The House of Good Tidings

The Demon of the Heavenly Son

The Scattered Mountain of Sand

The Mansion of Gold

The Treasury of Jewels

The Jeweled Banner of Victory

It is important to note that Mo divination cannot be separated from the rest of Tibetan Buddhism. This is not a divination practice to be done lightly, but one that has holy implications. True believers turn to Mo for advice on how to balance their spirits, make offerings to the deities, and ease their way on the path to enlightenment.