2017 through the eyes of an Eastern mystic

The 2017 year of the Fiery (Red) Rooster makes use of particular popularity in the East. Why? Everything is quite simple. This sign is one of the most dynamic in the yearly cycles, oriented on complex progress and clear results. In the eyes of an Eastern mystic, this period looks absolutely unique, even contradictory. In other words, this is not the time for half measures. In ancient China it was thought that the element of Fire, manifested by way of Yin (which especially characterizes the year 2017), suggests harmonious and sustainable development of all spheres of human activity. It's appropriate to mention here that on its own the Rooster represents the element of Metal, which in itself represents humankind, its essence and action. This means that in the upcoming year we will very likely avoid any kind of large-scale natural disaster. More likely will be some kind of social or political tsunami, or a drought of some kind. This is of course a more complicated and multi-faceted question, to which it makes more sense to return to through the lens of a concrete horoscope. 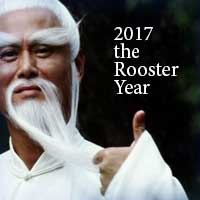 Ancient Chinese astrologers spoke about the year of the Fiery Rooster as a year in which will occur significant events, representing exceptional importance for all of mankind - though not for the individual or the nation. This is an important point as it shows one of the key principles of the present stage. The Rooster is intrinsically an individual, at times even egotistical, but in 2017 real success can be expected for those who are aimed not toward their own self-interest, but toward the common good. The more people who are touched by your plans and the more colleagues, partners and friends who you affect in the realization of your plan, the larger and more lasting will be your results. Actually ancient Chinese philosophy is largely based on such principles. Individual interests are served through societal good. And this is fair because confidence in oneself and in one's abilities - the understanding that the most amazing result comes about when we possess a strong foundation, a base in the form of companions and already-realized tasks. Here ancient Chinese mystics saw one of the incarnations of the Fiery Rooster, which is also expressed in other Daoist teachings.

It's important to note that in these years it is artistic people, those who are drawn to the most exciting and dynamic expression of their creativity, who receive an advantage. Said simply, this is the perfect time for those people who embody the creative energy of their entire generation, for scholars and artists. On the other hand, 2017 will also be especially fortuitous for those whose work centers on bodily contact - this means first and foremost, those in the military, but also professional athletes. The Russian saying a healthy spirit makes its home in a healthy body was very well-known in ancient China and this proverb is very apt to the yearly cycle of the Fiery Rooster. At this time, pretty much anyone, regardless of their sphere of focus, can achieve real success. All professions are needed and all are important - although Chinese mystics didn't quite say it like that, they did mention that a person in a position that suits him is capable of achieving perfection. Truly only such a person may reach self-perfection. Daoism is quite clear and emphatic on this point.

It's important to note that the traits Red and Fiery are quite fortunate characteristics of the Rooster. The principle of Fire ideally suits those who are working to personify accomplishment and comprehension. It's essential to understand that eastern astrological philosophy is understood on these premises. This is only a partially familiar conception for us - motion forward and only forward. This progress is achieved differently - the actual action is preceded by the production of a goal, which is possible only through complex analysis. But analysis of circumstances is the second question - the first comes only through analysis of one's own efforts - that is self-reflection. The most common conclusion of all this is that the most pointed conflicts of 2017 will arise in the soul, that is, in the consciousness of each of us. This is the true battlefield, where the outcome of the battle comes not from the strength of each side, but from their intentions. In this, ancient Chinese philosophy closely resembles Scandinavian shamanistic traditions, where the only driving factor is will. This willpower shapes intentions and allows for the realization of them.

On the other hand, the fire principle of ancient Chinese philosophy can exhibit a negative side - one that could be quite destructive in the year of the Rooster. Next to his leadership and organizational skills, the Rooster also possesses powerful adverse characteristics - egoism, criticalness, rudeness and jealousy - also overconfidence and pride, two traits which are especially important. In other words, it's very easy to give into provocation in the year of the Fiery Red Rooster, and similarly easy to lose control of yourself. And what happens when the dam stops being able to hold its own concrete and metal? The dam breaks of course and ruins everything in its path, and there isn't any creative beginning in that. So the most important thing to remember for those who would like to make it through 2017 in one piece - control your emotions and desires. With this, ancient Chinese philosophy is very similar to the Vedas of India, though there isn't any self-torture or meditation for its own sake here. Here we find the principle of the Lotus - introspection which allows for analysis of one's own missteps in order to avoid them in the future. You must agree that this is correct. Why not make use of centuries of wisdom?

And so 2017 through the eyes of an eastern mystic presents itself as quite a multifaceted period, in which each of us will most definitely find something of our own. Of course individual horoscopes will allow for a more definitive direction and for key motivations, as they will take into account the principles of Yin and Yang, as well as the elements (Fire, Water, Earth, Wood and Metal), and the zodiac sign (which number twelve in Chinese astrology as well as in the classical European tradition). Also key to remember is that the Fiery Rooster symbolizes personal progress through the common good - which is why it's not important in the least exactly what your occupation is. You could be in the military, teach English in school or work in assembly at a factory - your occupation can bring you satisfaction. Your energy is needed in this world and this is the key criteria of self-growth, the consequences of which will undoubtedly bring success.

Comments: 2017 through the eyes of an Eastern mystic

Copyright © 2021 GotoHoroscope, all rights reserved. Developed by GotoHoroscope.com. Please contact us via Contact Page or check out all available services and resources Site map.