Physically a lunar eclipse can be just as stunning as a solar one, it occurs when the moon passes within the earth's shadow and as it begins the shadow covers the moon to produce different shades usually a dark red but this can vary due to the atmosphere, the shadow moves over the moon so that it is then covered. A solar eclipse is when the moon passes between the sun and earth and blocks or partially blocks the sun. 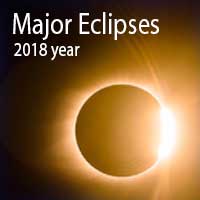 It is always a good time to mindfully think about what your life is about and where you are heading. It is a good time to look at patterns or where we feel happy or less content, and the power encompassed by an eclipse is a time when shifting energy just as light is shifted can then bring about the necessary pushes we need to reassess and arrange our lives.

It is better during the time of an eclipse not to jump in with both feet and make the changes or decisions, as focus also needs to be precisely settled and once the eclipse has past will leave a clearer vision point to then act on our feelings or needs rather than acting blindly in the darkness.


During 2018 there are 3 partial solar eclipses and 2 total lunar eclipses.


The Lunar Eclipses in 2018 continue similarly to those of 2017 cutting across the Leo/Aquarius axis of the zodiac, these are set to end in January 2019.

Full Moon Lunar Eclipse (Total) January 31 2018 (Leo)
Visible from the following geographical regions: Asia, Australia, Pacific, Western North America
Under a full moon in Leo, we are asked to look at our own powers and feel mighty in the control of areas in our life rather than leaving them to fate or chance. This eclipse will move things on and bring to an end false ideas or dreams. It is for being honest and open with a need to be confident in things we are planning for 2018. It will be an equally vocal time when news, media, arts and creative areas will hit the headlines and there maybe some conflicts of power. Eclipse energy means change, and new liaisons may emerge which will progress with deeper effects during the year in business, work or choice of financial commitments. Plans maybe created which are involving house moves, business locations, and stable fixtures which may not take place at this time, but later could become possible. There could be a progress in new business areas and financial planning, particularly in crowdfunding, fundraising and supportive ventures.

Full Moon Lunar Eclipse (Total) July 27 2018 (Aquarius)
Visible from the following geographical regions: South America, Europe, Africa, Asia, Australia
This is a full moon eclipse so expect a major upheaval time when close downs on projects which are not working, relationships which reach the end of the line, and financial situations will need addressing. There is a good outcome overall but the impact of this eclipse is all about working in a collaborative way, so helping hands and advice will be needed in some cases, to bring things out into the open. New dreams can be built around this eclipse though and while revelations or influences will need full on necessary actions, there is also a good focus on hopes for longer-term futures. Aquarian energy loves change, so it will be a time to make sure you are grounded well before it comes into play. Due to a Mercury retrograde at the same time, where confusion can be evident, care is needed not to plunge in without thinking, communications maybe held in a delay zone, and Aquarius does not like hanging around. Keeping calm during this period is going to need strength and control and you will get through the eclipse with a halfway balance between acting on what you want as much as what you need.


Solar Eclipses in 2018 are all partial so there will be less impacting energy than if they were full ones.


Solar Eclipse (Partial) Feb 15 2018 (Aquarius)
Visible from the following geographical regions: Antarctica, South of South America, Atlantic, Pacific
An Eclipse influenced by Aquarius is going to be a more optimistic energy and plans, ideas and new ventures could emerge which will have positive reactions from others. There maybe a need to close down any unwanted clutter during this time and things will not be slow in the world outside, so expect some breakthroughs or unusual discoveries in world affairs. Impressive ideas could take off and finances could take a turn for the better.

Solar Eclipse (Partial) July 13 2018 (Cancer)
Visible from the following geographical regions: South Australia, Pacific, Indian Ocean
Decisions in relationships could reach emotive heads and things will be brought to the surface, it could be also a good time for love or relationships to begin although not full on until the eclipse time has settled. This Eclipse will be affected by the sun sign Cancer and therefore will have a natural drawing to nurturing and caring energies. Group activities, joining ranks and finances could be sorted out with good results. It will be a time to reveal inner emotions.

Solar Eclipse (Partial) August 11 2018 (Leo)
Visible from the following geographical regions: North Europe, North-East Asia
During this time the sun sign Leo will be influencing us and creating power, control and a more direct energy around us. There could be displays politically and in the world of celebrities which are unusual and they could be dramatic. It is a time when similar happenings to August 2017 may rise to the forefront. Expect the unexpected in the media world, but even feelings will be urging us to be brave and conquer our own fears individually in day to day lives to step forward emotionally. There could be travel or transport problems during this time too.


The 2018 eclipses are part of a longer cycle which started in 2016. There are always reasons for these shifts which may feel uncomfortable at the time, but how to use the eclipse energy is part of how to survive the times when they happen and view the changes as bringing to light the true ways forward in the future.