2018 through the eyes of an Eastern Sage

The year of the Yellow Earth Dog (which 2018 will be) is perceived as special in China. The thing is, this year corresponds to the principle of Yang, that is, we are dealing with an active period, during which many basic processes could be subject to constructive change. This concerns all structures, starting with relationships between two people, and ending with relationships between two continents. Such cycles lead to change in every situation, and this is the seminal principle of Taoism. If a period of Ying is energy build-up, then a period of Yang is the time of releasing the built up potential. On the whole, such a time can be characterized by increased ability to work, increase mental capacity, libido and so on. In this sense, the situation could unfold uniquely, depending on which traits a person, country or planet lacks. See, you must remember that for eastern wise men, life does not revolve around humans, especially not a particular one. The Yellow Dog will enable you to use the previously deployed resources for good goals. At the same time, it's solely for good ones, there simply won't be any alternative opportunities now. That is, if a person purposefully wants to go towards destruction and regress, nothing will work out for him. Nevertheless, with such desires, he could still arrive at certain negativity because man's intention is the primary creative force of the universe. 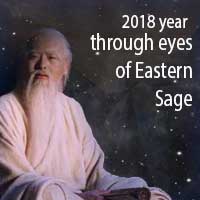 At the same time, in the eyes of a Chinese sage, 2018 will look like a time of trials. For many, these will be the testing of emotions, or more specifically, marriage tests. Some may not pass this test, purely objectively, but everyone will have a choice â€“ to go for it or not. That is, during this period you need to assess your own abilities properly. If you feel that you are not ready to start a family, then there's nothing bad about this. On the contrary, your understanding of your own unpreparedness only speaks of your maturity, your ability to make difficult, but correct decisions. It would be much worse to overestimate yourself because such a development would result in a lot of negativity and affect many lives. Of course, with respect to Karma, all of this will develop extremely badly for a person who has started a destructive streak. Thus in this area, you must be more accurate. On the other hand, it's not correct to save yourself from yourself. All the eastern religions practice active self-improvement. Nothing ventured, nothing gained. On the other hand, water can make the ground malleable, although it needs time. This is a direct indication of the possibility of consecutive changes.

One thing deserves special mention â€“ the fact that from the perspective of the Eastern tradition, the year of the Yellow Earth Dog will ambitious, but not egotistical or hypocritical. Bluntly put, if a person longs for power in order to make the world better (regardless of which aspect), at the current stage the universe will help him. In what way? This could be anything at all. Some people will see a real opportunity to open their own business, whereas others will meet their significant other. But remember that the world is made up of details. This means that great wisdom and great opportunities sometimes lie not in massive phenomena, but in the trifling details, which most people simply pass by. In this sense, 2018 will let many discover their own potential to the utmost. And this is a very important trend, which definitely must be utilized. Importantly, this is a period which will enable you to change the status quo, on both sides, of course. Put in modern language, this is a time of opportunities, but which specific ones â€“ this depends on us. The nuances will be determined by the sign of the Chinese Zodiac you belong to.

Comments: 2018 through the eyes of an Eastern Sage

Umberto 2017-09-27 23:39:47
-1
I don't see anything that intriguing. What is important, for me or anyone else, isn't what you think about the reading but it's applicability to healthy lifestyle guide for everyone.