What jumps out looking at Ms. JolieвЂ™s chart is her Ascendant, (rising sign). The rising sign correlates to the sign in which the sun was rising the moment the native was born. Just as the sunrise is the awakening of a new day, the moment a person is born marks the birth a new consciousness. Angelina Jolie was born at 9.09AM, at which time the sun was rising in Cancer, giving a Cancer quality to her personality, easily seen in her large family (she has six children), but more importantly, in her case, are the aspects to her planets in the 1st house. 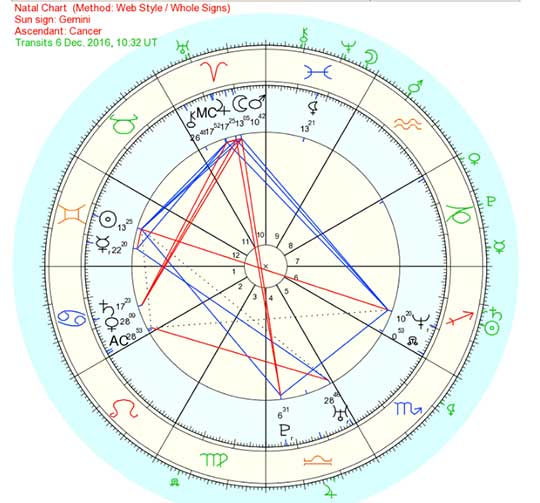 Aspect, in astrology, is the angle at which two planets are separated in the horoscope. Interestingly, the astrological theory is the same as music theory, and that is why when we divide the horoscope (360 degrees) by three, we get the perfect harmony of 120 degrees, the trine. In music, a perfect fifth is also a relationship of one third (3/2). For the Pythagoreans, 1 was perfection, (conjunction, in astrology, same note in music), 2 was conflict, the 180 degree opposition in astrology, and three was again harmony.

The 1st house is the house that represents the self, and always includes the Ascendant. At the exact same degree as her Ascendant at 28 degrees Cancer, sits Venus. This is a very fortunate placement that usually infuses the beauty and grace of Venus to the body of the native, which is very clear in this case. Also, it is important to remember that Venus is a feminine planet, and she is comfortable in the most feminine of all signs, Cancer, below the horizon, in the feminine night.

However, there is a perfect 90 degree angle between Angelina JolieвЂ™s Ascendant and the transpersonal planet Uranus. Usually, the transpersonal planets (Pluto, Neptune, and Uranus) show themselves more generationally, but in this case, the aspect (the angle between two planets) touches the most personal aspect of the chart, the Ascendant. This gives Jolie a strange, quixotic air about her and is definitely the source of her вЂweirdnessвЂ™. Finally, she has Saturn in the 1st house, the major malefic and one of the most powerful planets in the chart. Having Saturn in this placement is going to make her feel judged and give a serious, almost dower aspect to her. People with this placement rarely look like they are having a lot of fun.

Angelina Jolie is a Gemini, with her Sun in the difficult 12th house, giving her a murky, dark, distant resonance, but also a very rich inner life. She has a very strong 10th house in Aries, with Jupiter, Mars and the Moon in the fire sign, giving her power, luck and and real love for her work. This is clearly a beautiful, successful woman, but also a somewhat troubled and a eccentric one. 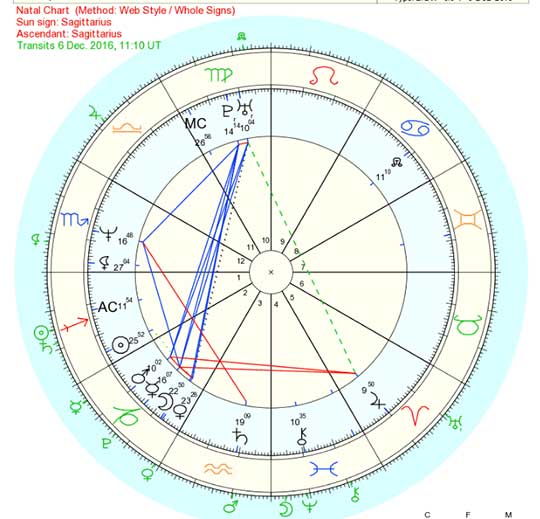 Brad Pitt was born in the Sun sign of Sagittarius, the opposite sign of Gemini. Sagittarius is a fire sign while Gemini is an air sign. Usually, Gemini loves information, talking, gossip, news but Saggitarius is the more philosophical and deeper sign. This can cause a certain fascination with Geminis for with the deep wisdom of Sagittarius. Both signs are mutable, meaning they are very changeable as they occur in the months right before the seasons change. Gemini is the sign that transitions from Spring to summer, hence the lighter, more superficial quality, while Sagittarius is the transition from the melancholy of the fall to the austerity of winter, hence the more philosophical and profound quality.

Brad Pitt also has his Ascendant in Sagittarius, probably making him quite irresistible to the Gemini Jolie. Pitt also has trine (120 degree angle that is harmonious) between his Ascendant and the ruler of the Ascendant, Jupiter, which is in the 5th house in Aries. This means a driving force for Pitt is not only having children but also having fun. His Moon is in the 2nd house in Capricorn, making him a bit cold-hearted and careful with money. Chances are Pitt tired of Jolie, while she still holds a candle for him. Looking at the ancient method of profections, JolieвЂ™s 7th house of marriage will be activated next year. It is very possible that there will be a reconciliation, and then the final, official divorce will occur in 2017.

JolieвЂ™s North Node is in the 6th house (service, work, slaves, small pets, health) in the sign of Sagittarius. This is her life direction, and for many astrologers, the key element of the chart because it clearly states what our path in life should be. JolieвЂ™s hard work for NGOвЂ™s and her efforts to adopt children are really what she is destined to do, her higher self. The more she focuses on this kind of work and service to others and the farther she gets away from the darker, more mysterious sides of life, the happier she will be.