The Cat in domestic form has a reputation of being tame, loving and friendly but most definitely not subservient. These creatures are quite unique in their ability to take discrete command over a household as if owning it but without being reliant on it or bound to it. Cats are highly independent and this mastery of self reliance is believed to be mystically transmitted from Cat Amulets, along with their good luck and protection. Those in possession of a Cat Amulet are also thought to attract the free willed liberated and intuitive spirit of this animal. The Cat is featured in many cultures as symbolic of liberty and as possessing a magical air of secretive astuteness. Ancient Celts imagined that the Cat was a guardian of the Under or Otherworld with the task of keeping its dark secrets well hidden. 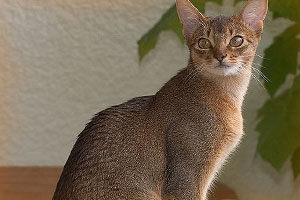 Muslim legends depict the Cat as an honored creature as it was extremely brave in saving Mohammad from the attack of an ferocious snake. In Norse myths the fertility Goddess Freyja's chariot was guided by a Cat and so it became known as a good omen for encouraging conception and blessing newborn babies. The mysterious watchfulness and psychic like presence of these felines sees them also portrayed and included in some Tarot card decks. The Cat has always possessed some enigma due to its skill of being able to see in the dark of night. Their inclusion in amulets can offer round the clock protective powers against bad or negative influences to the advantage of people and places. Evil spirits and forces lurking in the darkness are said to be deterred and weakened by sensing the close proximity of a Cat Amulet.

The ancient Egyptians were especially entranced by the graceful intuition of the Cat and considered it to be a sacred animal. They were often viewed with the much worshipped Moon Goddess Bastet and some greatly respected Cats were even given an honorable mummified burial. The Egyptians signified a Cat curling up with its head and tail touching as meaning that a circle of eternity is formed. From this position the Lunar Goddess Bastet was envisaged as forming into anything she chose. Young women in Egypt at this time carried 'utchats' their name for Cat Amulets as tokens for increased fertility. The number of kittens illustrated on these early amulets was taken as an indication of how many children the owner desired. Today Cat Amulets are still worn to radiate their positive connection with the creation of new life.

Centuries ago the Romans who looked up to the Moon Goddess Diana and the Goddess of Liberty would frequently see Cats laid at their feet. Cats were also idolized by the Roman Legions who used images of them to decorate their war banners giving them the reassurance of some kind of protection and luck in victory. The homes and jewellry of the people very often contained references and illustrative depictions of Cats. Lots of examples of archeological digs around the world have unearthed primitive remains containing evidence of the high regard these animals were held in. Plenty of trinkets, ceremonial tools, statues and arts retain the historical symbolism and significance of the Cat's influence. These relic pieces go towards inspiring the design and creation of our modern versions of the Cat Amulet and their assumed capabilities.

The Chinese have for thousands of years also considered the Cat to be a fortunate creature who generates luck and prosperity to its owners. Cat Amulets symbolize wealth here and many Chinese people have representations of them present in their homes and businesses. A popular example is of a Cat with his right, left or both paws raised. If the right paw is lifted this is believed to attract happiness and ample finances to the home or business. If the left paw is raised this is the best kind of Cat Amulet for enterprises to utilize. This is because it is thought a lucky cat in this particular pose will help to entice customers into a store or stimulate interest in a venture. Some Cat Amulets will have both paws elevated promising harmony in the household and a profitable business. Negativity, disharmony and evil is regarded as easily dispelled by nearness of the protective Cat Amulet.

The Western opinion on the favor of the Cat is varied, some individuals consider them lucky but some folklore interprets them as sometimes bad luck. These tales mainly concern black cats who in one view are very good luck in the home but to cross the path of one is superstitiously labeled as a bad circumstance. These stories passed down through the generations include the concept of a Cat having nine lives. Cats have also been associated with witchcraft and some Pagan and Wiccan spells, rituals and ceremonies for their intelligent supernatural image. When a Cat appears unexpectedly at your door it is said to be seen as an indication you should contemplate a change of direction or routine. All these worldwide fables and accounts of the Cat's luckiness add to the fascination of acquiring and owning a personal Cat Amulet.

Aside from attracting a lucky aura the Cat Amulet is known for its chance of stimulating and possibly increasing a person's perception. As well as guarding against evil it can be powerful enough to assist with the attainment of wishes as it strengthens self determination, drive and optimism. A Cat Amulet may help anyone with positive thought concerning their aspirations for the future in all areas of life. It makes a good focus point that emits beneficial vibes of confidence to the wearer. As a form of token comfort a Cat Amulet is a useful addition in combination with a variety of meditating and relaxation routines. Its renowned luck transferance can prove fruitful when combined with harmonious mind and body practices like Yoga or Martial Arts. Cat Amulets work with the power of the mind to amplify their effect.
Daily Horoscope Weekly Horoscope Monthly Horoscope Horoscope 2021