Of all of the four main lines on the palm of the hand, the fate line, or the line of destiny can often be one of the hardest to read. Whereas lines such as the heart and head line are much more intuitive to read, because there are so many more nuances that the fate line is supposed to be able to predict, it is hard to tell sometimes what the different arcs and ups and downs of the fate line actually refer to on some occasions. This line runs from the middle of the base of the palm to the middle finger, or sometimes to the ring finger. Other times it is not present, but as it is one of the main lines, this means that it is present on the majority of people. 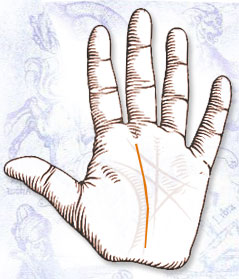 What the fate line generally applies to is the level of success in the work place, but because that is such a specific correlation, and not one that everyone has (some people are unemployed, others start off rich and successful on their life, there are a multitude of reasons why a person may never hold a job in their life), the line has gone on to be applied to just general success throughout life, and whether some people will be able to really achieve the goals that they have set out for themselves in life.

Even though the fate line seems to cover so much more than the heart, head, or life line all in and of itself, because it makes more sense to do it this way, it is generally read the same way as the other main lines, albeit more carefully. It is important to be sensitive of the person's career choices and the person's personality when reading the fate line, more so than with any other line. If the line wavers like so many other lines can, then this means that the person may have a shaky career path. It is possible that throughout their life, they will take on many different jobs, instead of sticking to just one. Either that or they will take on a variety of different, sometimes even unrelated career paths.

If the fate line is more straight, this could mean that the person will maintain about the same level of success all of their lives. If they have been under the same employer for a long time, then this may mean that they will continue to be under that employer for a much longer amount of time. Straightness shows consistency. If the line happens to make any strange stretches up or down, this could symbolize either a great and abrupt period of success or of failure depending on the direction and on which hand is being read. It is important to be sensitive and to really know your subject before attempting to read this line correctly.
Daily Horoscope Weekly Horoscope Monthly Horoscope Horoscope 2021