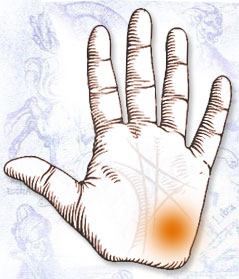 Besides just imagination, the mount of the moon also stands for intuition. This is different from intelligence, or book smarts. Having a good intuition implies mental abilities that exist, but did not necessarily need to be honed. It is a kind of inherent intelligence that relies partly on instinct in order to differentiate itself from normal intelligence. It is a responsiveness that not everyone has, and to truly use it, it is suggested that you be very in touch with yourself and your place within the world around you. It is all of this that the mount of the moon symbolizes.

Of course, as much as the mount of the moon is able to tell you on its own, our most accurate understanding of our destinies comes from the interplay between the mounts and the four main lines that make up our palms, the fate line, the life line, the hear line, and the head line. The most meaning is derived from at what point and for what length these lines intersect with the various mounts. Anomalies may be possible, but realistically, it is not as if it is possible for all four lines to intersect all four mounts. Therefore, based on the location of the various lines of the palm, there are only a few lines that are most likely to come into contact with this mount (which is located at the base of the hand farthest from the thumb). These lines are the fate line and the life line.