The Mount of Jupiter

The lines on the palm themselves tell of very important but very general events and personality aspects of your life. If you have a wavering line of life, then this may mean that you are constantly in a state of poor health, or that you may face some health trouble later in life. If you have a line of heart that curves upwards, then this may show that you are prone to spikes in your emotional capacity, meaning that you may have moments of extreme happiness. While these statements may all be true, they are also extremely general, and don't tell anyone more about the future than they can already guess themselves. This is why the mounts exist. The different mounts allow you to determine more specific things about the future of the subject who is having their palm read based on how the important lines intersect with the mounts. 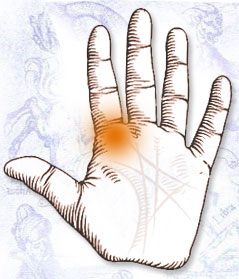 Jupiter was a very social god. He was successful and held a lot of power in mythology. Far from being one of the minor gods that held a more specific spot, Jupiter held general strength and power. This is not necessarily physical power, but power in a more political sense such as power over others and power within social circles. This could also mean mental power. Because the heart line is known to intersect with the mount of Jupiter (the area right below where the index finger meets the palm), where it intersects and how it intersects with it can tell how power relates to the emotional stability of an individual.

There are hundreds of ways to interpret these intersections because of how nuanced they are, but for example, if one were to have a line of heart which mostly wavered until it met the mount of Jupiter, and then was straight throughout the course of the mount and continued wavering later, this could mean that the person whose palm is being read only feels stable in a relationship when he or she possesses the most power. Power may be an emotional comfort.

Alternatively, something like this can also mean that the person hides behind the shell of power, keeping their true selves away from others for one reason or another. If it is to be interpreted as a time line, this sign could also mean that a person will not be very successful socially for a good part of their life until one point (emphasized by when the line hits the mount) where they make many friends and hold a lot of social power.
Daily Horoscope Weekly Horoscope Monthly Horoscope Horoscope 2022

Comments: The Mount of Jupiter

DeAna 2016-04-25 08:37:12
-1
I have a very prominent Jupiter mound on my left hand, but my heart line though deep and obvious, runs across from my pinky just pass the middle of my index finger and takes a pretty sharp curve upward.It doesn't intersect with Jupiter mound at all. Can you tell me the meaning of this? (if bad, you can still tell me, I can handle it) Thank you.
imtiaz ahmed 2015-01-05 11:48:49
+3
about education and marrige