The Mount of Neptune

The mount of Neptune is difficult to read because of the difficulty which palmists often have in finding it.

Because palmistry was honed and popularized by the Greeks thousands of years ago, much of the modern understanding of palmistry is still tied up in their mythology even though their religion is not practiced commonly by many in modern society. Each line on the hand has a specific meaning, with the most prominent ones having the most important meanings. Each mount on the hand also possesses a specific meaning; however the mounts are tied in with the definitions of the old Greek gods. 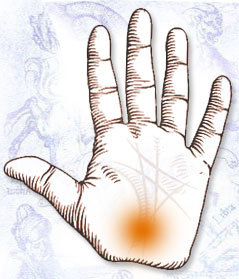 Each mount on the hand, for the most part (in the more mainstream forms of palmistry) is named after one of the Greek gods. From what we know about mythology, each of the gods represented a certain aspect of humanity. These could come in the form of a physical attribute such as speed, muscles, beauty, or it could come in the form of a social or mental attribute such as intelligence, creativity, and sociality. The meaning of each mount on a person's hand directly corresponds with the attribute that the god possessed and how it relates to your own daily life. Thus, how pronounced the mount of Apollo is determines how creative you will be in life, and how pronounced the lower mount of mars is will determine how aggressive you are. This is because Apollo and Mars were known for being creative and for being a warrior respectively.

Neptune was the god of the sea. His relation to the sea now mirrors the way that humans feel about the sea today. He commanded all elements of it, down to the smallest fish. As humans, we find solace in the sea. The sea generally holds an important place in our emotions because of how we relate to it. It makes people feel comfortable. Thus, because of the relation between Neptune and the sea, the mount of Neptune is all about sensitivity. This is not the same thing as the line of heart which tells you about how you handle relationships; this has more to do with how soft and understanding you can be as well as how instinctual and naturally this ability comes to you. If you have a prominent mount of Neptune, then this means that you are probably a sensitive person, and this makes up a large part of who you are.

Since the mount of Neptune is found at the base of the palm, in the center, it is possible for it to connect to the life line in some cases. If this is the case for you, what this means is that you are the type of person that is deeply emotionally affected when something happens to you in your life. This connection to the life line means that your sensitivity is so great, that when you are emotionally damaged, this can also cause a great toll to your physical health. Conversely, if you are happy and content, then this can mean great health benefits.
Daily Horoscope Weekly Horoscope Monthly Horoscope Horoscope 2021

Comments: The Mount of Neptune