The Mount of Pluto 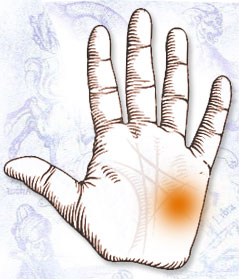 The significance of any mount is best understood by what lines the mount intersects with. Though the prominence of a mount over other mounts on the hand can give a good idea of how certain qualities are distributed amongst the person, the best way to understand how these qualities will come to affect them later in life is through seeing how the different main lines react with the mounts. Most mounts give an idea of the qualities of a person, such as their social behavior, their level of aggression, or their popularity, but the mount of Pluto is a bit different. This is because in palmistry, the mount of Pluto just represents change, and understanding what is going to change in the future can be very beneficial to a person.

Despite how different our hands are, many of them have several commonalities that are well noted throughout palm reading. For example, it is unlikely that a life line will ever have to intersect with the mount of mercury because of how far away the two are from one another on the hand. It makes more sense this way when their meanings are considered. Of course there are always anomalies, but these are not heavily documented. Therefore, in most cases when dealing with the mount of Pluto, understanding that its location is near the pinky finger just below the base where the mount of mercury is located, it is safe to say that the main lines that are likely to touch the mount of Pluto are the heart line and the fate line.

Respectively, the heart line and the fate line are very different. The fate line represents career success and failures whereas the heart line represents emotional stability and attachments. However, these are the two that are most applicable to the meaning of the mount of Pluto, which is indeed, change or transformation. If one happens to have a palm that shows the mount of Pluto being intersected by the fate line, this will usually mean a change of career. It could represent a small change, such as a change in job duties, but because of the grandiosity of Pluto, this usually means that something even more important will be occurring such as a total change in job direction. Think of going from accounting to marine biology. This would show a complete 180 in terms of career path, which is just what the mount of Pluto is there to show.

If you have a heart line which manages to cross with the mount of Pluto, because the secondary and more specific definition of the heart line is about relationships rather than general emotions, this can mean a change of relationship. For some, this may mean a hard break-up or a rough patch in their relationship in general. For others, this may mean a divorce, or perhaps a marriage. Generally the person that is having their palm read will be well aware of the state of their relationship and will be able to accurately predict what this intersection with the mount of Pluto really means in specific terms.
Daily Horoscope Weekly Horoscope Monthly Horoscope Horoscope 2021

Comments: The Mount of Pluto

shubhi halder sarkar 2016-12-28 07:11:09
+3
gud to get some information about pluto, i have a question that whats the cross in the mount of pluto means, i read some where that this means sudden death before the age of 45
Gopalakrishnan 2012-06-01 14:36:29
-4
Very interesting to know about Pluto Mount.
Is there a Neptune Mount and has it got any
significance in one's life? You can as well
deal with all other Mounts,Planges and sizes/
shapes of palms? Is it necessary to read right hand palms of males and left of females? If yes, why so? Thanks
Gopalakrishnan