The Mount of Saturn

Palmistry can often be confusing. Trying to dissect what each line tells you is difficult enough without even factoring in the information coming to you regarding what the different mounts say. The hardest part about palmistry is trying to understand the meanings that the different mounts have on the meanings of the lines. Whenever a line intersects with a mount, this causes this section of the line, however much of it is covered by the mount, to take on a different meaning. 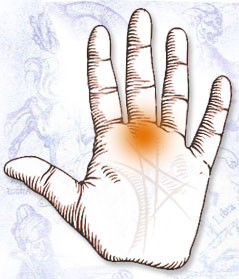 This is about understanding the mount of Saturn, so the mount of Saturn will be used as an example. In palmistry, the different mounts all correspond to different Greek gods for the most part. Each Greek god was known for possessing a certain power or a certain characteristic which set them apart from the rest of their kind. It was a thing which they embodied and which they were known for. In palmistry, these habits and personality types which made up the gamut of the gods' expressions inhabit the corresponding mounts that are named after the gods. Therefore, because the god Saturn was known for representing responsibility, the mount of Saturn on the palm, which is located in the space just below the middle finger, will read how you interpret responsibility in your life, based on which lines connect to it.

The head line refers to the intelligence of a person, to their ability to understand and comprehend certain things, and to their yearning to learn certain things. Therefore if a person has a head line that intersects with the mount of Saturn, it can mean that their true mental prowess is shown when they are given many different responsibilities to handle. The arc of the line can also be important. If it is an upward arc, it can mean a positive correlation between responsibility and work, whereas a downward line would mean a negative correlation.

If the fate line intersects with the mount of Saturn, this could mean that it is your fate to eventually take on much responsibility at work, since the fate line represents the working life. If your heart line manages to somehow extend to the mount of Saturn, this could be tough to interpret. However, it could mean that you tend to be the more responsible partner in your relationships. Or that you prefer to be in a role of responsibility when you are in a relationship with a significant other, or a simple friendship.
Daily Horoscope Weekly Horoscope Monthly Horoscope Horoscope 2021

Comments: The Mount of Saturn