The Plain of Mars

After already getting into why the plain of mars is so difficult to read, it is important to understand the other reason why it might be difficult. The other reason that the plain of mars presents a bit of a problem in reading is because of not only how much space it covers on the hand in general, but because of what it represents. The plain of mars essentially represents almost everything that the other mounts don't cover. It has to do with everyday life, and how you handle the most common situations. It also shows what is of the most concern to people when determining which of the four main lines intersect with the plain. 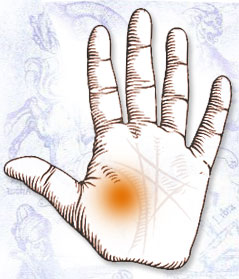 Because it occupies the center of the hand, the four main lines, the hear line, life line, head line, and fate line, all equally have the opportunity to intersect with it at some point. This means that the results of this intersection will give very complicated complex results to anyone that is attempting to read the palm. For example, if the life line intersects with the plain of mars at the same time as the heart line this could mean that the subject whose palm is being read is preoccupied thinking about their health on a daily basis. Not only that, but the presence of the heart line would also suggest that they truly take things dealing with their health to heart and get very emotional about them.

Another possible combination of lines that could touch the plain of mars is the head line and the fate line. This could mean that in the everyday life of the person whose palm is being read, they are consistently spending time working on their career. Having the head line there would mean that they are also spending time thinking very analytically about all of the steps that they are taking in their career. This could even indicate that the person is over thinking things a bit but does not necessarily mean that.

There are very many combinations that can be made each with a unique thing to say about the person whose palm is being read, however, one more example might help. Another example of different lines that might both tough the plain of mars at the same time would be the life line and the fate line. If both the life line and the fate line touched the plain of mars at the same time, this would mean that the career of the person was tied up in their everyday life. That a day could not go by without them thinking of their career. On top of that, it would also mean that their physical livelihood was also tied up in this. That if their career was to end for some reason, their health would begin to plummet. Either that or it could mean that negative health conditions are originating from putting too much effort in at work.
Daily Horoscope Weekly Horoscope Monthly Horoscope Horoscope 2021

Comments: The Plain of Mars