Like many powerful amulets the Vajra is often utilized in the performing of spiritual rituals of all kinds. This particular centuries old amulet form is believed to represent an intense firmness of spirit described in the various teachings and practices of Buddhism, Jainism and Hinduism. The power of Vajra is thought to attract and reflect positive inspirational energies while keeping away and protecting against close negative influences. In many religions and belief systems this ideology of positivity as a primary guide assists with many of life's challenges. The wearing or personal possession of a Vajra amulet allows a person the advantages of enhanced strength and clarity of mind. This then gives them an inner calm to think more clearly and positively and to channel their current focus on the good rather than the bad. 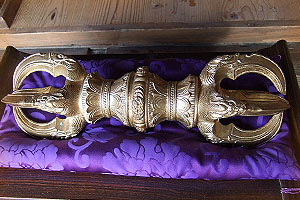 The name Vajra originates from a Sanskrit word for 'bolt of thunder' or 'diamond' and in Roman times referred to the mythical mighty God Zeus or Jupiter. The origins of this amulet's name and its meaning provide a clue to its legendary unbeatable strength and effectiveness. Vajra amulets have been utilized for thousands of years as a meditation and healing promotion tool as well as for their protective and guidance qualities. Tantric Buddhists consider the Vajra to be the masculine Yang in rites and use it with the female Yin counterpart the Ghanta, or bell. This merging of male and female influences evokes a uniting of wisdom and compassion enabling perfect conditions to meditate. The center or 'seed' of the Vajra amulet is focused on inducing insight into transforming anger, or turning negative emotions into more productive positive thought.

One of the reasons that the Vajra amulet is considered to be so powerful in its radiating energy is due to its materialistic representation. The Vajra is representative of the thunderbolt of Indra in ancient Verdic Astrology and so regarded as 'indestructible'. It has been depicted as also comparable to a Diamond gemstone, in that is cannot be 'cut' or destroyed, but it can itself dissect anything and is unbreakable in its effectiveness. The Vajra is sometimes called a Dorje and is held in the right hand in the form of a scepter by Tibetan Lamas during their religious ceremonies. Here it represents the numerous stages of visualization on the path to higher thought processes and perfection. Each part of the Vajra signifies one of the different emotions possible for someone to experience on the journey towards purity and enlightenment.

The Vajra most frequently seen is the five pronged version consisting of a central prong as a depiction of the universe and 2 sets of 5 surrounding prongs. The equally spaced encircling branches are usually seen as symbols of the five Bhuddist wisdoms and poisons. These are an illustrative outline of the emotional abandonments that are required, the poisons, and the enlightenment achievable on doing so, the wisdoms. Simply put, the individual negative emotions of greed, hatred, delusion, pride and envy need to be banished in order to let wisdom flow. A person so enlightened by overcoming negativity will be free of anger, possess pure thoughts and desires and gain knowledge and accomplishment in life. A Vajra amulet can be further charged with its purposeful purifying forces by the act of ceremonial, meditating or chanting rituals.

The prongs of the Vajra amulet that symbolize the poisons are each associated with a designated Bhudda image. Greed is connected to Amitabha, Hatred with Akshobhya, Delusion with Vairocana, Pride with Ratnasambhava and Amoghasiddhi relates to Envy. If these negative interferences can be understood and combated then the five wisdoms are believed to shine, become clearer and so be easier to acquire. The wisdom of sameness is acquired by the elimination of Greed, a mirror like Wisdom is gained by counteracting hatred and reality wisdom is realized by the absence of delusion. The wisdom of individuality is reached by overcoming the influences of pride while an all accomplishing wisdom is the Vajra's reward for not succumbing to Envy.

Some Vajra amulets are very detailed and may have many rings around their centralized foundation including a number of petalled lotus flowers. A Vajra sometimes has 3 rings to signify the doors of liberation known as emptiness, signlessness, lack of composition, and effortlessness that form the base for the 8 upper and lower petals of the lotus flower. Above these bases there may be additional rings representing 6 perfections that include discipline, effort, generosity, patience, meditation and the acquisition of wisdom. An outer 4 pronged shell, if present on the Vajra amulet, is assumed to be illustrative of the expressions of our feeling, form, perception, motivation and consciousness. Details do not increase the power of a Vajra amulet but they are added reminders of its depth and variety of concentration and its overall purpose.

Vajra amulets are not reserved for, nor confined to, any set beliefs, ceremonies or customs and do not require any special training to use. Many people carry them today in some form for use as a guardian, to promote self-healing and to aid in relaxation periods. There is no specific way or particular hand that a Vajra should be held and everyone has the metaphysical ability to draw upon its power. Individuals have found it particularly useful in assisting in the attainment of numerous goals in life as it offers an object that reduces elements of negativity. The Vajra amulet's main aim of replacing negatives with positives can supply inner direction that usually prompts wise decisions. This amulet also possesses a mysterious quality of inactivity if its use is for inappropriate objectives. Vajra's are designed to generate subconscious peace and a sense of well being and are also interestingly believed to magically return to their owner should they be lost.
Daily Horoscope Weekly Horoscope Monthly Horoscope Horoscope 2021