The chart of USA : Elections in November through 2017. What do the stars foretell?

At first, it was the movement of the sun that heralded in the seasons. Then the phases of the moon dictated the best times to grow crops. Royal houses used the day-for-a-year method of predication to figure out the prospects for the heir to the throne. But it was only in 1781 when Uranus was discovered, that we started looking for - and finding - correlations between unique events and planetary position. The era of Uranus brought revolution and a fierce spirit independence to the fledgling states which has been a hallmark of the country ever since. As we shall see, Uranus will be instrumental in events over the next year. 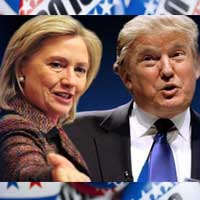 When was the United States of America 'born'? Nobody knows. We have a date, or we think we do. Independence day is celebrated on July 4'th, to commemorate the birth of the new nation in 1776. But is that right and what about the time? Of two things we are sure : the birthplace was Philadelphia and the event was the initial signing of the Declaration of Independence. However, as to the date, there are various interpretations : Thomas McKean disputed long after the event (1796) that the Declaration had not been signed on July 4th, pointing out that some signers were not even present at that point, nor elected to Congress on that date.

The best information we have, is from English astrologer, physician and herbalist, Ebenezer Sibly (1751-1799), who documented the time as 10.10pm on July 4'th. This is confirmed by John Early, an American astrologer who made a handwritten note in his 1776 ephemeris. But other sources view this time as a London-based time (GMT) and not local time, apparently quoting Thomas Jefferson, that appear to corroborate a late afternoon/early evening signature.

The resulting chaos has led to all manner of speculation; however, most astrologers use the Sagittarius Rising chart (July 4th at 5.10pm), since it seems to work better when it comes to rectification - a method of re-interpreting the chart, based on time modification to better understand events in context.

So what does all this mean for the forthcoming elections and beyond? Well, that all depends on who wins the election of course. Astrology isn't predictive, but it does analyze trends. There are three major trends which we need to be aware of, for 2017 starting with (what else) the Uranus station of July/August 2016.

A station occurs when a planet appears stationary to us, immediately before changing direction. It isn't actually still : its movement is simply in sync with the earth. But the station point marks a new era, when energies change from internal to external or the other way around. The station of Uranus occurred in a hard placement to Mercury and would have called attention to the National Debt, finances in general, our homes and our borders. One of the Presidential candidates has been calling for a giant wall to to built, in order to protect our homes from the neighbors in the south. And who will pay for it? The neighbor, of course. Perhaps not practical to enforce, but then the astrology suggests that its a 'hard play'.

So moving forward into 2017, we have three major transits to consider, all occurring over time, interacting, overlapping and influencing at differing times and degrees. In addition, Saturn is the limiting factor that sets the national mood.

Neptune is a great one for both aspirations and self-delusions. We have this amazing ability to self-inflict massive damage to ourselves and while transiting the third House of communication, we run the risk of massively antagonizing our important friends and partners. If Mr Trump wins, expect a lot of chest thumping with regard to Mexico. Since Neptune is big on hype and low on detail, this is most likely going to lead to aids having to apologize for the 'mis-interpretions'. Mrs Clinton will likely take the other tack, being conciliatory and diplomatic.

These two transits will occur simultaneously in the middle of the year. This is bad folks, because Pluto in the 2nd House, is all about financial ups and downs. This will be a down and a massive one. It was Pluto transiting the 8th House which triggered the Depression and while this won't be anywhere as bad or as long, expect massive financial restructuring. The good news is that once again, the government could shuffle the decks, sweet-talk the creditors and print more bonds. But sooner or later, this game must end. Mr Trump is more likely to apply business principles to this than Mrs Clinton, who is likely to push the game forward. But regardless of who occupies the White House, old problems will resurface again. How - and most importantly, when - it's dealt with is debatable.

Saturn moves too fast to be considered for transits, but we look at the placement of Saturn in time, for the national mood. Saturn stands for both doom and gloom as well as hard lessons won and digested. The reason for this double consideration, is that it the planet seems to bind us to our abilities and warns usf of our constraints. Venture too far and we get hit on the head. Venture not at all and we waste our days. Natal Saturn lies in the 10'th House, which is the placement representing the President. The nation demands of our leader, strong determination, a refusal to capitulate but also stubbornness and an unyielding disposition.

By current transit, Saturn is in the first House of self-identity. Which leader will prevail in the election? What traits will that leader bring to the White House? The Saturn transit is really asking of the American people to look deep into their souls and decide what kind of American President they really want. The hard-hitting, no-nonsense protectionist or the softer but more savvy diplomat? The leader who will do the unthinkable and allow market forces to prevail? Or the leader who will protect and buffer the poor and middle-class from previous excesses?

In conclusion, we can look at the the Sagittarius Rising chart (also known as the Sibly chart) and forecast a massive financial fork in the road for 2017. How its dealt with is dependent on which candidate wins the election. Mr Trump is likely to allow a hard fall while Mrs Clinton will try shield the country by allowing the problem to become worse. The problem will be exacerbated by either Mr Trump's abrasive style or Mrs Clinton's deal-making. Expect a difficult year ahead, with potential for an upswing in later years if Mr Trump wins the election. His medicine might be harsh, but his administration might be a landmark for the USA. Mrs Clinton will try preserve the status quo and balance the ship, but Mr Trump has potential to create the roots of growth required to make America great again.