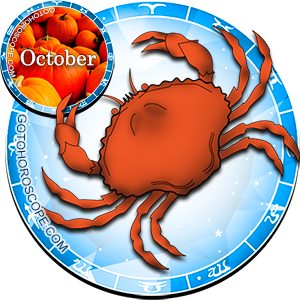 The representative of the cardinal cross of the Water trine, Cancer, in October 2013, can count on a very positive flow of the circumstances. At least, the stars from their part will try to neutralize the maximum negativity coming from the hostile celestial bodies, and it will give its protege plenty active positive energy. Although "plenty" - it's putting it too mildly. After all, thanks to the combined influence of the Moon, Saturn and Mars, Cancer will receive so much powerful energy, which, other things being equal this sign alone could neutralize the negative effects of any planets in the solar system, or even of any two planets. But, of course, there will not be any equality. The fact is that all of the aforementioned planets, by giving all of their energy to the Cancer sign; they themselves lose the ability to resist other planets. For example, Jupiter. In principle, Jupiter will be the only celestial body in this month, which is likely to bring problems to the Cancer sign. However, currently this planet, before the "bare" fronts of the Cancer sign, is able to replace two or three of the other negatively predisposed stellar warriors.

As a result, in October 2013, Cancer's work life may bring some really serious problems, which can bring major adjustments into the lives of the representatives of this zodiac sign, and not paying attention to this fact would be extremely foolish. Currently you have the unique opportunity to independently face all troubles, which Jupiter will try to arrange for you. What does this give you? Firstly, a valuable experience to get out of the most challenging situations. Secondly, the energy that you will use during the fight, it will not go away, only it will get transformed. This says that all of your actions and the accomplishments of today, you will definitely be able to repeat them in the future under similar circumstances. Pay special attention to your colleagues, most likely Jupiter will focus its power on someone of them. Here, the strategy of your behavior should be shaped on the basis of the features of the current situation. If you are confident in the justice of your superiors, then you can try to further inflame your presumptuous competitor, and at one point, not seeing the significant effect of his actions, he will be sure to cross the line of reason and that's when he will be taken care of. If you cannot rely on your superiors, then you will have to lead the game. You will have an abundance of energy, the main thing - is to direct it subtly and skillfully. But, each case will require its own unique method.

The ones born under the Cancer sign, during this month, should also be prepared for significant changes in their personal life. When making any decision, you have to remember that sometimes it is truly better to just let go of a person, than to pointlessly continue to for a fairytale future. At the same time, it is sometimes better to chase the crane, of course, if you are sure that this is not a crane, but the real Blue Bird. Moreover, if the bird no longer evokes those gentle and tender feelings, for which you both once so fervently and sincerely got happy about. Do not be afraid to change the situation; do not be afraid to lose something, because the universe will gift you with something as an answer. And who knows which option is best for you. But, no, you actually know. And you can, can do it all, because right now you are holding a great amount of power in your hands, in the use of which you are not completely restricted. Just think carefully before you make a choice, because there will be no return.