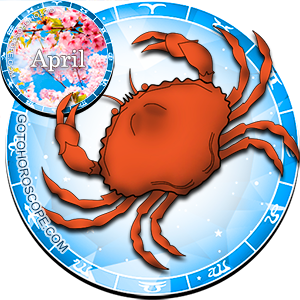 The sign of Cancer will be in an uneasy situation in April 2014. Not in a negative one, but in an uneasy one. This will be explained by the fact that two energetically powerful planets will both fight for their right for full monopoly on influencing this sign. The first of these celestial bodies is the Moon, the planet-ruler of Cancer. This month, the little sister of the Sun will also be the "celestial leader" of the Cancer sign, which means that the strength of the Moon will permanently rise to a few degrees, reaching its climax during the Full Moon (April 15th). Undoubtedly, this fact speaks of a very positive attitude from the stars to this sign. Nevertheless, on the other side, Mars, responsible for the "fall" of this sign, will be multiplied in strength due to several general combinations and with its power, it can compare to the Moon. The result of this fight is hard to predict, though it is evident that both sides will have equal force. Another energy battle will be happening close, though it is much smaller it deserves a mention. The planet-exalt of Cancer, Jupiter, will fight Saturn, responsible for the "expulsion" of this sign. Everything is clear here. Saturn will lose to Jupiter, so the Cancer will receive a considerable boost in terms of the business sphere.

Therefore, in April 2014, the area of business will be such a field for the Cancers where a lot will depend on those born under this sign. Strictly speaking, choices made by a person are the deciding factors in any situation, but currently you have a great opportunity to improve your financial standing with Jupiter's help. If you work for yourself, then it is now that you should think about optimizing your production, lead it to a new level. Think and carefully analyze the environment. It is evident that you will discover that too many resources and your own efforts are just wasted. So why do you need your potential if you cannot realize it? Find a way to use your strengths and you will understand that you can reach to new heights. If you work for someone else, then also think about a radical change at work. For example, try to change the method of approaching the more important issues. Listen to the opinion of others, perhaps you are doing something wrong or something can be improved. In the given situation, do not turn down advice even from your worst enemies, since no one knows where exactly may the bits of true knowledge lie.

In terms of personal relationships, however, everything will depend on the fight between the Moon and Mars. If in work these two bodies will simply compensate each other, then here they will be interchanging in having the dominating influence on your life. This means that the times of victories will come suddenly and confidently. These times will just as quickly change for the worse. You will need to have maximum concentration on your lover and closest friends. Most likely there will not be any conflict situations with relatives, the stars are confident. However, the rise of certain ambiguities in your relationship with those who are close to you in spirit not in blood is quite likely. This means that you have to relax, take a deep breath and objectively think about the situation. Perhaps meditation will be a great solution for you that will allow you to find the most optimal decisions. Just do not be afraid to trust yourself or those around you.