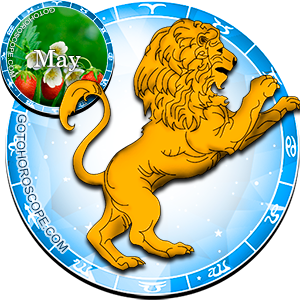 For the zodiac sign of Leo, May 2014 may be equally a successful time as much as a negative one. It will partly depend on which of the celestial fronts fighting for the Leo's destiny will take over, and no one says that the leadership of this or that planet will stay constant throughout the month. With that, a lot will depend on the representatives of this sign as well. Their perseverance, bravery and professionalism must be used in close tandem with the knowledge of the energetic nuances of this current period. Pluto, the planet-exalt of the Leo sign, will be fully on the side of its earthly protege in May, while the Sun, its planet-ruler, will change its preferences and due to the general powerful negative combinations will supply this sign with only negative emanations. On the other hand, Mercury - a long-term foe of the Leo, responsible for their "fall" in its classic position, will be on their side this month. Currently, Mercury will be a great shield for screening solar negativity, once again due to some general combinations. Uranus, responsible for the "expulsion" of the Leo, will try to focus the waves of its passive negative energy on the work sphere, but will face immense resistance on behalf of Saturn, the "celestial leader" of the Fire trigon.

As a result, the Leos can expect significant changes on the work front in May 2014. It can be said with a high degree of certainty that if you have your own business then you should pay special attention to your business partners. Currently, some of them may present you with real opportunities that will help you reach significant heights during the shortest time. Just be attentive, as the stars do not speak directly of details, but the general theme of their advice is quite evident. For those who work for someone else, everything will be even more dependent on external circumstances, particularly on your coworkers and management. While you can manage management using some diplomatic cleverness, it will be certainly impossible to fix your relationships with colleagues during this point in time. Be ready that for practically the entire month they will not be especially reasonable towards you. The reason for this behaviour will reveal itself to you towards the third ten-day period, if you really try to find it. You should try to find it, to avoid ambiguity in the future.

In terms of the "love front", everything will be much more straightforward. In the beginning of the first ten-day period, your lover will already position herself somewhat differently than before. A lot will substantially change in her behaviour. Perhaps the reason for that are the advice from her friends, or perhaps something else. Either way, the changes will be radical and not all of them will have a positive vector. However, what is required of you here is a silent-neutral position, as by the middle of the second ten-day period everything will return to normal, and reality will bring sense back to your "second half". Here is where you should take everything in your hands, so such stupidity does not happen again. For that, you need to clearly state your position to your lover and try to objectively and evidently prove its main postulates. If you will call upon all of your diplomatic ability and be successful, then in the future you can certainly have mutual understanding. If you are unsuccessful, then similar situations will arise many more times.