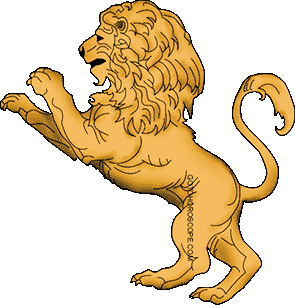 Both Aries and Leo have aggressive temperaments. Both have got egos to burn and both like to lead. Aggressive Aries wouldn't dream of taking second place, and kingly Leo needs constant admiration. This is particularly true if Aries will allow Leo to hold center stage on occasions. Sharing the limelight is important on Leo's part, however, as Aries will feel the need to be on stage once in a while as well. Aries should flatter the Leo on his/her physique. Being so much alike sexually can be one of the most important things that will keep them true to their commitments. Between the two of them, if one is loving and tactful with the other, meeting that persons emotional needs they can create a steady and long-term union.

Both are fixed signs, so neither will give an inch. Leo merely becomes angrier and Taurus more obstinate. Leo considers that it is natural for him/her to be a leader in the bedroom. Taurus will supply the attention that Leo requires but will expect it to be returned. Leo loves to dominate and eventually Taurus being strong-willed but more patient, will raise the sword when their needs are not being met. Thrifty Taurus is also appalled at Leo's careless spending habits. Taurus is cautious and deliberate; Leo expansive and extravagant. Taurus stubbornly refuses to give Leo constant worship, and Leo is too self-centered to give Taurus the devotion it needs. On the other hand, excellent physical qualities and great sex appeal are there for both partners in this match. There is a strong physical and emotional attraction, but too many obstacles to hurdle.

An affectionate pair who really enjoy each other. While Leo loves with his/her heart first, Gemini loves with his/her mind. Gemini seems to be romantic enough for Leo. The Gemini's stability will not be fluctuated by the moody Leo. Leo's self-confidence blinks at Gemini's flirtations with others. Gemini's penchant for ridicule can annoy regal Leo, though, and Leo will probably demand more adoration than Gemini is willing to give. It can be a problem but they have so much fun together that they don't tend to pay attention to such small problems. Both Leo and Gemini have a strong desire to have a passionate, emotional life. Sexually, Leo loves wholeheartedly and Geminis variable desires are a complete mystery to him/her. Leo is quite capable of warm-heartedly breaking down any resentments that Gemini may harbor from the daytime, thereby easing the tension in the bedroom. It will be an acceptable connection and, surely, a safe marriage in the future.

Usually, this is a good combination since the Moon (Cancer) reflects the light of the Sun (Leo). The Leo has an ability to stabilize moody Cancer. Generous, openhearted, strong Leo is just what insecure Cancer is looking for and it creates a feeling of reliance for a changeable Cancer. On the other hand, it is necessary to flatter and admire by Leo's advantages, especially in the field of sex, where he/she should dominate. If the Cancer is ready to let the Leo be the leader in the bedroom the passionate connection, and rather successful marriage, can take place.

This should prove to be a compatible combination, but it is not always true. In the bedroom, as well as everywhere else Leo tends to think only of him/herself. A question is: Is it possible for two "I am" to turn to one "we are"? Both Lions are extremely romantic and sexually compatible. They enjoy a strong sex drive and these two will probably spend a lot of their time together in bed. This could develop into an overactive sex life that may branch off in perverse directions, totally without love, unless checked and kept within bounds. They should allow each other time "to shine", and to share the light in case they want to be together. Well, it is not always possible, but when it is so - long live the king! Long live the queen!

Here is a good chance for a happy partnership. Magnanimous Leo will overlook Virgo's tendency to be critical, while Virgo will take pride in Leo's accomplishments, good humor, and lovable nature. Virgo will bring in to the couple's sexual life a large amount of emotional heat and understanding. Leo will respect Virgo's clever and alert mentality. Virgo will try to excite and satisfy the partner. Leo is also a persevering person, so the chances for mutual satisfaction are enormous. This is one of those relationships that depend on the type of relationship. The connection is usually "nice" and a durable union is also possible.

Both signs satisfy the needs and desires of each other. Leo is more interested in the strictly physical side of love than Libra, but Leo's style and brio can win Libra over. Libra is indecisive and Leo will naturally take charge. While Leo is a sensitive person Libra is more emotional and they are both crazy about sex. All the time that will be spent in a bedroom will be a continuous celebratory salute for them. In case there is a collision of characters, Libra should concede. It will not create any difficulty, because of the Libra's ability to cooperate. The Libra's best weapon is a correct strategy and tact. The hot connection can turn into in a rather warm matrimony.

There will be an instant mutual sexual attraction, equal in force between them. But Leo finds it hard to cope with Scorpio's jealousy and possessiveness. Intense, smoldering Scorpio is on too short of a fuse, while Leo is much more buoyant. These two very strong-willed individuals generally create some rather stormy moments. Generally, in such relationships, there will be no "romanticism", but these two are capable of sensual loving and good, long partnership.

Together they share a liking for freedom, adventure, and meeting new people. They are both inclined to entertain themselves and consider love as an amusement. Leo likes to make love as often as Sagittarius. Sagittarius stimulates and inspires Leo, and Leo in his/her turn makes Sagittarius more faithful. This connection is perfect, and the happy marriage is guaranteed.

Ordered, organized Capricorn neither understands nor approves of Leo's exuberant impulsiveness. Leo forgives and forgets; Capricorn, being the one who is slow to anger, seldom forgets. The Leo supposes that the Capricorn is full of love and spends it too economically. The Capricorn, in turn, is also not the best partner for the Leo because of his/her poor imagination. The Capricorn is much more passionate in bed and they are not fit for each other in the bedroom. They are both representatives of independent signs of the zodiac that are inclined to dominate in everyday life. These two are almost complete opposites and in case of a love affair their distinctions can appear insignificant, but in the case of marriage, they will never be happy together.

Leo can't get the cooperation or the admiration it requires, and Aquarius resents Leo's attempt to rule. They have different views of independence: to Aquarius, it means freedom to explore new horizons; to Leo, it means pursuing a glamorous, extravagant lifestyle. Aquarius is interested in the world; Leo is strictly interested in Leo. Their sexual life will be unsatisfactory for Leo as Aquarius can and will find others that capture their interests and this will frustrate Leo, causing Leo to think that his/her mate is inhuman and uncaring. While these two will be attracted to one another, they are zodiac opposite which means that it can be bad as well as good connection.

Leo is flamboyant, domineering; Pisces is unworldly and mystical. They intrigue each other because they are so different, but the differences don't mesh well. An active Leo cannot understand timid and quiet Pisces. Leo won't even try to understand the Pisces' behavior in the bedroom. Representatives of both signs are inclined to receive more than giving. Leo needs public acclaim, while Pisces prefers the sheltered life. Leo can't tolerate Pisces's ultra-sensitivity, nor Pisces's inclination toward exotic boudoir activity. When Pisces runs into despondency the, Leo's pride doesn't allow him to participate and help their partner to get past the problem. It will be a rather difficult connection and unsuccessful marriage.