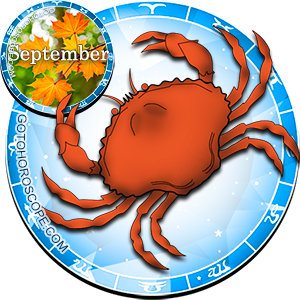 Cancer, the zodiac sign in which the Water element lives through its energetic climax, may be confident in September 2014 that the lion's share of the interstellar positivity will be on his side. As a result, the representatives of this sign will be able to accomplish great things. The realization of the most complicated projects, the resolution of old and very deep personality conflicts - this and much more the Cancers will be able to do without external help. Jupiter, the planet-exalt of the zodiac House of Cancer, will not turn away from his earthly protege even in light of his participation in some extremely negative combinations. Perhaps the support of the ruler of the celestial rivers of time will not be so large and all-inclusive, but it will be sufficient to neutralize the influence of Saturn, the planet responsible for the "expulsion" of Cancer. On the other side, the most vicious enemy of Cancer will be Mars, in his usual position responsible for the "fall" of this sign. It is quite evident, however, that the berserk warrior will not be able to get past the protective barrier put up by the Moon, the planet-ruler of Cancer, which will be significantly strengthened due to its membership in the "purple triangle". Moreover, Mars will most likely turn his energy against himself, which in the physical aspect will be reflected in some sudden, but quite timely problems for the Cancers' foes.

In other words, the Cancer may not fear competitors in the work direction throughout September 2014. No one will cause you any large problems at this time; you do not have to worry. Only one source of problems is relevant to you now - and it is yourself. Your laziness and your unwillingness to change something can ruin everything. Seriously, if you have wanted to maintain a conservative principle of behaviour for a long time, then the stars recommend that you urgently change your priorities, otherwise you will not be able to use even one tenth of the resources available to you. It is sad to miss possibilities with such a potential, is it not? So, collect yourself and do what you need to do, not what you want. You will get used to that quickly; do not worry. Just determine the best motivation for yourself. Although, if you will be able to maintain yourself just on your willpower, then your positions will grow even stronger. Either way, you will have to change your perspective on the world. That is, of course, if you want to have progress and reach new heights.

In terms of the "love front", everything will be even more interesting. You will have to not only change yourself, but try to radically influence the worldview of those around you. All of this before the New Moon (August 25th). Of course, you can avoid displacing anything and leave it as is. With such a setting, you can expect a calm, harmonious time with minimal conflicts that you will resolve yourself in the shortest time possible. However, you can abandon all hope for anything grand or significant. Nothing will change by itself, and the negative moments that have affected your life so negatively before will not disappear, just take on a latent form for a time. Whether to choose the temporary relief is up to you. It is also your right to forfeit the opportunities offered to you by the stars. However, if you decide to take matters into your hands, then you will know no rest. However, the raging hurricane of emotions and metamorphoses will bring you such satisfaction, that you couldn't even dream of. Mainly you will be able to change everything. What are we talking about? You perfectly known yourself what has been concerning you for a while now. It is time to resolve everything once and for all. Otherwise, bury your fears deep into your heart forever. The decision is yours, the stars just offer you multiple alternatives.

Thanks you for explaining it all clear- only now I understand what happened to me. This has been the most traumatic time ever in a life time, My ex, who is Virgo, we broke up sep 2014. It has been really bad and everything was dark and obviously negative.
[Reply] [Reply with quote] [Cancel reply]
goldie 2014-09-05 21:36:34

Hey, I really appreciate your knowledge about astrological terms and all. But it will be a lot more better if you post horoscopes in human language. Not all people are experts, they just want to know whether it'll be good or bad. Not that "planet-warrior-guardian" sh*t. Thanks!
[Reply] [Reply with quote] [Cancel reply]