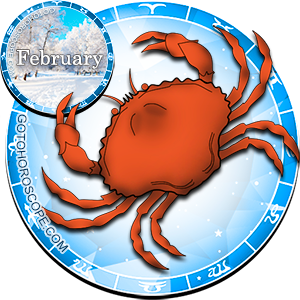 The zodiac sign of Cancer in February 2015 will have complicated relationships with the world. The thing is that the Moon, the planet-ruler of the sign, will currently play the role of the "celestial leader" of the Water trigon. As a result, the collected influence of the Celestial Queen will be as positive as possible, it is likely that many Cancers will get an expanded perception that will allow them to overpower their opponents within a few moves. At the same time, relationships with close ones and even distant relatives - distant in terms of contact - will be fixed. In other words, the sphere of emotions and feelings will blow up with an entirely new specter of emotions, especially positive ones. On the other side, Mars, responsible for the fall of the Cancer sign, will be significantly empowered due to his overall position. Moreover, the Red Warrior will be supported by Jupiter that is traditionally an exalt of Cancer. The result of this star combination will be a total wave of negative impulses that will literally cover the work aspect of the Cancer's life. Luckily, Saturn - responsible for the expulsion of this sign, will maintain neutrality, due to which the Cancers will have a real chance to overcome even those barriers that will at first seem impossible.

In one way or another, but the sphere of business and entrepreneurship will not bring the Cancers any special opportunities in February 2015. It is most likely that you will have to try as hard as you can to maintain your status quo. So concentrate on the current tasks, but do not try to maintain your attention on everything. If you will have especially many problems, then divide them into groups and make decisions according to their importance; either way these problems will not occur indefinitely and if you will not wait too long, then towards the middle of the month you will dig through the lion's share of the situation that could bring you real problems. If you have your own business, then it is not the time to attempt to make improvements to the technical process. Innovations are the key to a successful development, but either way - there is a right time for everything. You understand yourself that now is the time to wait, to collect your strength and resources, to wait for the moment when you can suddenly attack and capture any fort. If you are a common employee or occupy an unimportant position, then your position must be as active as possible. Always aim to be on time everywhere and in everything, yet do not take on more than you can handle. Right now, management will not pay due attention to your efforts, but the results of all your actions will have far-going consequences.

In terms of personal relationships, here you can do everything you want. Practically all your wishes will come true in the shortest of terms, unless they fall against the wishes of others. Moreover, your presence will not be always recovered for their realization, so in this way you can consider February 2015 to be your own personal paradise oasis on the life band. Your relationship with your lover will be as harmonious as possible and in any situation you will come to a resolution that will satisfy the both of you. You will not face conflict with close ones either, any your initiative will be interpreted in the precise way that you want. Pay special attention to those around you, to your close friends. It is likely that this month all of you will have to overcome some small challenge, the results of which will define your future together. Do not be ashamed of taking on responsibility and if you know what is required of you - then do what is required. Just remember, it is not scary to fail - it is scary not to try.