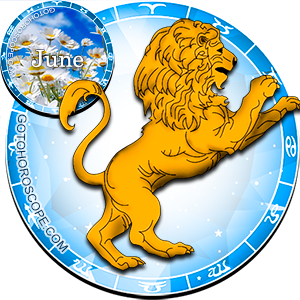 The representative of the fixed cross of the Fire trigon, the zodiac sign of Leo, should expect a dynamic and an unpredictable life stage in June 2015. This stage will be unbelievably rich in all kinds of positive events. This is mostly connected with the fact that the Sun, the planet-ruler of Leo, will be significantly reinforced due to some general interstellar combinations and its own cardinal position. The solar positivity will be supplied also by the positive emanations of Pluto, which is responsible for the blossoming of the Leo's life strength. Altogether, the positive energy from these two celestial bodies is strong enough that you will find a small amount of planets that will be able to overpower it. Nevertheless, the negative emanations of Mercury, responsible for the fall of the Leo sign, will not be screened through fully and will most likely display themselves in the sphere of the word direction. At the same time, a small, but confident negativity should come on behalf of Uranus, responsible for the expulsion of the Leo sign. Uranus is most likely concentrated on the love front. While the positive stellar energy will be definitely stronger than the negative one, you should still avoid fully relaxing.

Regarding the sphere of entrepreneurship and business, the stars recommend that for June 2014 the Leos slightly pause their dynamic and steady movement forward. It is likely that the Leos will encounter all kinds of potholes on the way that they will be just unable to notice if they are going full speed. However, they will definitely bring you significant damage. That is why you should pause and think about what is ahead of you. Perhaps, if you evaluate the situation, you will come to the conclusion that your road right now is heading towards a dead end. In that case, it would be logical to use radical measures - or at least change your place of work. This way, if the issue does not resolve, then you should aim to counter the negativity by any means possible. It is impossible to describe the situation in full detail, its aspects will be too individualistic. In either case, if you collect yourself, concentrate, will find moments that really matter within all the mundane routine and tasks, then you have an opportunity to reach your goal. Right now you have enough resources and strength to realize any project, the main thing is to use that strength in the right way.

The love front will not bring the Leos serious problems in June 2015, on the contrary, the representatives of this zodiac sign have the right to hope for some truly large positive events. First, be attentive and careful in your conversations with close ones. Some of them are currently deciding whether they should bring you into their plans or not. There is no guarantee that it will be very important, but why miss the chance if you have the opportunity? So try to use all of your charisma, but do not reach full paranoia. No one owes you anything and if you want to reach some results, then no one can do that by you. In your relationship with your lover, try to be more tender and open. Trust her and do not let jealousy creep on you. Of course, we are talking about temperance and in certain situations jealousy is certainly called for. This is not a feeling or property, as many people might thinking, instead it is a feeling of respect, a recognition that you can do much more and better for a given person than others. However, senseless jealousy leads to relationship degradation. Realize the entire responsibility of your actions and only then make the final decision.