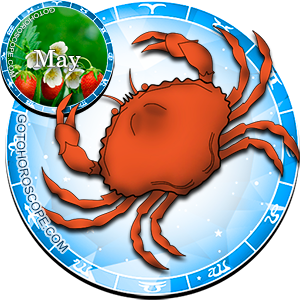 May 2015 will be a very ambiguous time for the zodiac sign of Cancer, but it will be mostly positive. You should first note the influence of the Moon, the planet-ruler of Cancer, which will be significantly reinforced by its overall interstellar position. At the same time, the Black Moon has a special influence on the representatives of this sign, as the main May antagonist of the Cancer is Mars, which is the strongest antagonist of the current celestial object. This position of things also has a negative side, since the increased influence of the Black Moon creates an anomaly in the rise of empathic abilities, which may become a serious problem for people that are psychologically unstable. Jupiter, the planet-exalt of the Cancer sign, responsible for the flourishing of its life strength, will not leave his proteges and will confidently provide them with powerful flows of life energy. Saturn, responsible for the fall of this sign, will change his negative emanations to positive ones, and so the Cancers will receive one more ally. As a result, Mars will forcefully concentrate his negativity on the work direction, fully excluding his influence on the personal sphere of life of the representatives of this sign.

This way, in May 2015 the Cancer will face many disappointments and problems in the direction of work. From the first point, you will feel how your plentiful life energy will simply cease finding itself rightful application. Currently, you are capable of many things, but circumstances will limit you, the way that your planet-allies will be unlikely to be able to help. You should currently focus, so no matter what do not go into defense. You must think carefully, but fast - you should always build up the dynamic so that your activity level maximizes towards the end of the month. Do not get fooled, most of the energy and resources that are currently in your possession will not be useful towards the start of the next month. Strictly speaking, the balance will come back to zero, so there is no point to accumulate anything. Act even in total opposition of circumstances, but be ready for responsive action on behalf of your environment. Luckily, your competitors are unlikely to be active enough to bring any serious problems to you. Yet, you will have enough to worry about anyways.

The sphere of relationships, however, will make you happy in May 2015 by its unreal offer of possibilities and truly lucky situations. The circumstances will play to your hand in each and every circumstance, so you can sometimes afford to make decisions without thinking them through. You can truly relax right now and let events follow their course. In your relationship with your lover, you will reach maximum harmony and the stars recommend that you remember this feeling, so you can restore it later when needed. Ideally, you should plan a common vacation for this time or some kind of trip, even an extreme one, as some adrenalin will help you. If there is no such possibility, then find a local alternative, like a jump from the parachute. In your relationship with your relatives and close ones, try not to ignore their requests, even if they seem insignificant to you. This is very important, do not dismiss your relatives, since families are your true support, without which a happy future will be an unlikely myth.

May 2015 monthly Horoscope for 12 Zodiac signs