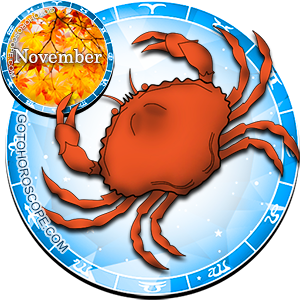 Alas, for the zodiac sign Cancer, November, the penultimate month of 2016, will be dynamic, but not as positive as you would like. The fact is that Jupiter, which traditionally performs the functions of exaltation of this sign and at the same time acts as the "heavenly leader" of the whole water trine at the current stage, will literally turn away from Cancers and will leave them to deal with their problems alone. Fortunately, such a negative point will be the only one of its kind and, for example, the Moon, the planet-ruler of Cancers, is not going anywhere, that is, it will continue to provide you with positive energy vibes. Saturn and Mars, responsible for the "expulsion" and "fall" of this sign, will respectively reduce the dynamics of their actions due to the global planetary combinations to a great extent, so their influence as a result will be minimal, so it makes no sense to pay any attention to these objects of the solar system. In order to overcome all the current difficulties, it will be necessary to mobilize your resources and "don't bite off more that you can chew". In other words, the old saying that "a bird in the hand is better than two in the bush" will be particularly relevant nowadays.

If we dwell more on the working direction, then in November of 2016, Cancers will be able to implement any projects and reach any heights, but with a few caveats. Firstly, you will need to consistently and scrupulously "sift" through all the events through the prism of your current capabilities. In the sense that, unfortunately, there will be more than enough scenarios at the current stage, but not every one of them you will be able to use with regard to your actual position. You'll have to think a little, as they say," to flex your brain" ? in the end you really reach your desired result. The second point that is worthy of your attention is associated with your cohort, to be exact, you're your colleagues (or partners, if it comes to your own business). Now it will be important to work in a team, that is, you will need to strive to achieve the goals that meet some general criteria and are desirable for everyone, not only you. The matter will be complicated by the fact that at first glance you and your partners may well be looking at completely different directions and pursuing various goals. This means you will need to find some common grounds and also convince your potential allies of the usefulness of the joint work. The situation is far from being insoluble and extremely challenging, but it will definitely call for a lot of "intellectual resources".

In terms of personal relationships, November of 2016 may well turn out to be a rather quiet time for the people born under the sign Cancer, but even in this case you will have to make allowances for current astronomical features. First of all, you should pay attention to the way things work in your family circle. If this area is reigned by discord and total misunderstanding, then you should get rid of all other third-party matters and stabilize the situation as soon as possible, because without a reliable "rear" you won't be able to set on the road of productive development. Another thing lies in the fact that you shouldn't cut yourself off from those who want to help you. It is a bright and dynamic time, but it's by no means easy, that's why your personal relationships may well experience a kind of crisis now, not a total one, but fairly noticeable. And there's no need to keep all your problems to yourself. Especially when someone close to you readily offers you their hand. Pride and arrogance are concepts that are not alien to Cancers, but that does not mean that you should be guided by them. Think about it, and don't forget that, especially for you, family values and emotional balance are always a priority.