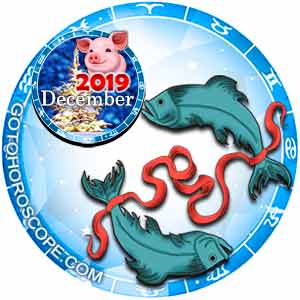 Pisces, you haven't had the easiest of years in 2019. It hasn't been absolutely terrible, but no doubt it's been a bit of a slog at times. You've gotten used to feeling slightly uphill all the time and it's time that came to an end. December isn't just the wrapping up of the calendar year, it's also when you're going to start seeing the light at the end of the tunnel, the hill start level downward, and other metaphors than symbolizing your load getting a little lighter. The moon will be squaring Mars and Neptune during this time and that means the stars are going to take some of that burden off your hands. You have the universe at your back and when your load is lessened, make sure you appreciate it.

This has been a strange year for you regarding work and your career. You've probably spent most of it feeling like you don't know what your career is anymore. This isn't a bad thing. You've been doing a lot of reassessing and evaluating of where you are in life and that might involve dismissing a lot of things without a clear idea as to what would take their place. It's okay if your career path is a little hazy. That's the sign of someone doing some exploring; striking out to find a new, uncharted path. Trust yourself on this journey, especially since December is then this will start to bear fruit. This probably won't be the most perfect dream job suddenly appearing and landing in your lap (but it could. Who knows?), but you're going to start seeing signs that demonstrate that, yes, you're on the right path. What may have seemed like flailing and being adrift was in fact just what you needed to do. Let this be the encouragement you need to keep going and trust that great success is ahead. And don't be afraid to ask for help in any aspect of your working life. People are there and ready to help you out.

Relationships haven't been easy either. Maybe you're running around in the wrong crowd, or maybe you're just not in the right frame of mind to find a partner you'll want to stay with. Who knows? What is important is that you recognize when you're taking time for yourself and when you're running away from putting yourself out there because it feels like too much effort. Recognize that and act accordingly. If you need to recharge at home, by all means, do. But if you want to find that connection and can't seem to get off that couch, well push yourself a bit more. If there was any time for you to especially give yourself a push it would be around the 14th and the 19th. These are prime nodal days for Venus and your love lines. In fact, ley line forces around the world are spelling out your name at this time, meaning that someone special (or someoneS) is looking for you.

Financially you'll want to keep your head down during this entire month. As best as you can, make and squirrel away your money (but don't skimp on holiday presents). You may want to defer any large purchases for yourself until after the new year unless something becomes very pressing. This might be the perfect time to pick up a side gig for a little bit of extra cash. And while we'd never advocate that you play the lottery, you might - just might - want to get a ticket on the 16th or the 26th. Or go crazy and do both days (but please, gamble responsibly).

Life isn't easy for anyone, but you've had a particularly hard go of it lately, Pisces. Look for your load to lighten considerably by the 29th, although you might not realize it immediately. The effects of it might not be felt for a couple of weeks later. Most importantly in December, though, is you should spend that last week quietly reflecting and evaluating on where you've been. You might be pleasantly surprised at what you discover about yourself. Stare out the window, drink some hot chocolate (or a hot toddy), and let it wash over you.