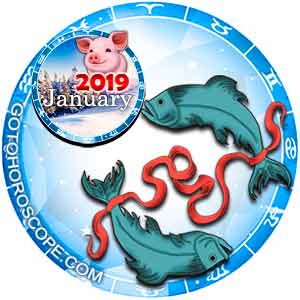 For Pisces, January 2019 will be particularly successful in terms of career achievements. In general, a period of thoughtful and timely actions and difficult to predict situations is likely, but at such times friends, relatives or colleagues will not leave Pisces alone to fight less than favorable circumstances. Strictly speaking, obviously negative situations will be very few, especially those with long-term effects. Of course, if you decide to do nothing and simply step aside, then the horoscope does not know where such actions may lead. But with at least minimal interest, with the desire to change something for the better, Pisces will have all the cards in their hands. This situation in the first month of the year was made possible by the exit of Venus from the antagonistic Mars sector. This is a short-term trend, but it is enough for Pisces, as they say, to take the bull by the horns and surprise everyone—both enemies and allies.

The first third of January 2019 will help Pisces understand themselves better. In general, the past one-year period is not particularly successful for self-searching and forging relationships with yourself. However, the beginning of the first month of this year, partly preserving the characteristics of the preceding stage, will give Pisces a unique opportunity to combine the advantages of different cycles. This means that you will have to divide your attention equally between the sphere of personal and professional life. You should not give in to momentary passion, but nor should you deny yourself what you really want. At work, be vigilant and do not let yourself be hurt. If someone is encroaching on your territory, take retaliatory measures, decisively and uncompromisingly, so that your opponents never feel a desire to approach you again. Due to the fact that Mars is one of the dominant positions this month, you should not have any difficulty with this response. Do not forget to be yourself, especially with your loved ones.

In the second part of January 2019, Pisces will be able to achieve great success, partly since they will position themselves in the right spot at the beginning of the month. This middle period is especially important for those who have their own business. Do not neglect the signs of fate, which means that if for some reason you think that you should not sign a new contract, even if everything indicates the success of the transaction. It is worth slowing down and listening to yourself and your intuition. In general, this is not the time when emotions should prevail over intellect, but the sixth sense is something wholly different, and Pisces always trust it. You should make no exception even when everything appears to be great. In terms of health, it would be good to take care of yourself during this period. An exam, complex treatment, prevention—all that is needed. It is better not to postpone these, or free time will be nonexistent due to sickness. Moreover, with your level of vital energy at its peak, there will be no time to rest.

In the final period of January 2019, Pisces will once again change tactics. It is possible that at certain moments you should be even softer than before, but in your working life, a great deal of aggressiveness is welcomed. The stars do not call for you to go over your bosses’ heads, but if you see the opportunity, use it —despite the fact that it may not be appreciated by someone else. Pisces traditionally care too much about others; however, the final period of January should be the height of your vanity (but without fanaticism). This is a great moment to solve all old problems once and for all. On the weekend, be sure to get together with people, calling those friends whom you have not seen for a long time. Perhaps someone will astonish you, and a lot will change in your life. In terms of professional activity, do not be afraid of innovation and act deliberately. Keep a strict but generous policy when it comes to your employees and coworkers. Put professionalism first and personal qualities second. If something does not work out now, know that you will still have a chance to return to the issue, so for now just enjoy life and work on your plans.