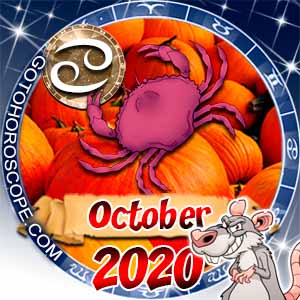 The end of last month shifted you into creative and cooperative energy, but you should expect some blockages in October. Like all the other signs you’ll confront Mercury Retrograde mid-month, but this could be an especially frustrating time for you as it injects most of its mayhem into the water element you’re used to expressing yourself with. This is no cause for despair though; your friends will stand at your side despite any miscommunications by the time the month is over.

Putting your best foot forward on the 1st, the Aries Full Moon in your tenth house restores your independence in your professional life. While you may have been hiding yourself away to deal with some sensitive emotions in the weeks leading up to this moon, you can’t conceal your opinions or your competency for any longer.

You might be asked to perform impromptu, or a boss could stick you with another pile of responsibilities that weren’t originally a part of the job description. Such a change of direction and seizure of control is likely to offend, but try to ask yourself if you’ve stated your boundaries before now. If not, avoid making a scene and digest the situation first. You do have options here, whether that means taking charge and accepting the responsibilities or firmly stating your expectations to an authority member.

By the 2nd, any initial rage from the full moon should die down a little thanks to the ingress of Venus into Virgo and your third house of communication. You can use this organized earth energy to mediate any conflicts and exchange news or plans with logical clarity sans emotions.

Even when you communicate your plans perfectly with tact and stellar timing, an exchange of information almost always results in a change in the relationship dynamic. These changes are positively transforming your life after the 4th when Pluto stations direct in your seventh house of partnerships, but the hidden tensions that are released could feel like an indecent exposure for a week or two with this transit. Do your best to practice gratitude when self-sabotaging behaviors make themselves known; Pluto is only bringing them up to catalyze your growth.

The creativity faucet is clogged after October 13th with Mercury’s retrograde in Scorpio. Recent undertakings and new prospects are stalled for the next three weeks or so meaning it’s best if you don’t force your way into any new agreements or contracts.

Because most of the retrograde takes place in your fifth house of romance and entertainment, you might see an ex, or an old flame appears out of the blue. As always, it’s up to you whether you try to patch things up, but you should know that most things that begin during a Mercury Retrograde tend to fall apart in a messy way a few later once the planet stations direct.

A good way to avoid falling into old unsupportive cycles is by revamping your home and meditating on your personal development goals. October 16th's Libra New Moon in your domicile fourth house gives you just the opportunity to clean up your sanctuary and add some fresh décor pieces to your space.

Indeed, a newfound or revived artform such as home decorating might be just what you need to get the creative juices going again.

Blockage or no blockage, after the Sun enters Scorpio on the 22nd, your fifth house is flowing a little easier albeit maybe a little darker than most people can understand.

Your ability to express yourself in an inspired and imaginative way clears up even more on the 27th when retrograde Mercury leaves your fifth house for your fourth. This does mean a risk of detours and delays in your home and family sector, but Venus enters Libra the same day to act as a sentimental buffer. This is a calming and rational breath of fresh air after a tumultuous sea storm, so make time to bask in the simple pleasures of life like lounging on the couch with a cup of hot cocoa or snuggling up with a good book.

It could be a good idea to invest some energy into connecting with family members you’ve fallen out of touch with – especially parents or individuals you see as a motherly influence.

Strangely enough, the most prominent astrological event this month occurs on Halloween. Like a scene out of a classic horror film, the Taurus Full Moon peaks on Halloween in your eleventh house of friends. Mercury is still retrograde, so miscommunication could lead to an argument or two, but you’re not afraid of walking away from a group that no longer shares your vision.

You head into November with a fuller understanding of the role you play in the lives of others and where you stand in group activities, renewed by your vision of the future.