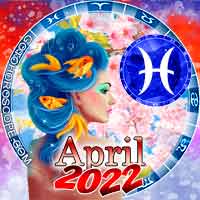 April might not be your sign's particular season, but it's sure to be one of the best months of the year, Pisces. So let's get to it.

The month starts right away with a New Moon in your 2nd house of finances. It brings in the heat and fire of the Sun to enlighten you to new ways to maximize your profit. Whether that's work or just resources to enable you to complete passion projects, you won't have to do too much digging to find it. However, the ruler of this lunation is Mars, who's being challenged by Saturn at least toward the mid-month. Because this is happening in the 12th house, you might want to make sure you're not spending the money you're making to feed bad habits or out of sheer escapism. Pisces ultimately is a sign that knows how to have fun, but there is such a thing as too much fun.

On the other hand, the 12th house also deals with loss and mental health, so these themes could make it hard for you to enjoy your victories. For that reason, we'll explore how to work around this a bit further.

The peak of the Mars and Saturn transit is just 4 days after the New Moon. This is when both planets conjoin, and this transit can take quite a toll on our mental health. For the duration of this transit (about the first 2 weeks of the month), you might want to apply either Mars remediation techniques if you're born during the day or Saturn during the night.

Remediation techniques are ways in which we can connect with the energies of a particular planet so we can either gain a better understanding of the reasoning behind particular transits or outright diminish their effects. A good Mars remediation is always working out, and it's even better if you can actually join karate classes or something similar. Mars in the 12th house can cause bottled-up anger, anxiety and even psychological fevers. Then, these sort of activities is sure to blow up some steam. A good mantra or affirmation to chant would be: My rage and wrath are valid, and I can use them constructively.

Saturn, on the other hand, is the complete opposite. He's slow and depresses and demotivates us in the 12th house. As the planet representative of the time, he has a relationship with impermanence and debilitation. Usually, the best Saturn remediation is helping the poor or the elderly. The goal is to slow down a bit and face some of the harsher realities of life. Even though these themes of poverty and death might seem grim, there is comfort in recognizing that these are natural processes. An affirmation for the weeks of this transit would be: There is no rush, and in the end, everything crumbles to dust, my pain included.

I know this might've been a bit of a change in pace from the leading paragraph, but the month is mostly positive. I just spend some extra time on this particular transit to make sure you don't let anxiety or depression get the best of you and that you can enjoy your month to its fullest extent.

The next big transit is the Full Moon of the month happening in your 8th house of other people's resources and collaborations. This lunation is ruled by Venus, who ingresses into your 1st house earlier in the month. Pisces is one of the best signs for Venus, and since she's there along with Jupiter, you know that there's a good fortune here. Venus brings a certain magnetism to you that allows you to get whatever you want through the use of charm and care. Since the 8th house deals with other people's money, this could be an excellent time for working with others, applying for loans or —especially— grants. If you have a business partner, too, there's a good chance that their advancements in finances benefit you greatly somehow.

To top it up, on the 28th, we have a trine between Mercury and Pluto just a day before the lord of the underworld goes retrograde. This connects your 3rd and 11th house, which plays heavily on the theme of friendships. With the intellect of Mercury, the end of the month will likely be a time to share intense ideas back and forth with your peers. This transit only lasts about a day, but with Pluto, even the quickest event can be impactful. So be on the lookout for earth-shattering insights from friends, colleagues or even siblings.

With that said, as much as there's that nasty Mars and Saturn transit this month, there's much to look forward to, Pisces. Known that even when you seem to miss every single chance you have, that might mean they're simply not meant for you. And that yours is literally just around the corner. Saturn means patience, after all. Good luck, and have a blast.