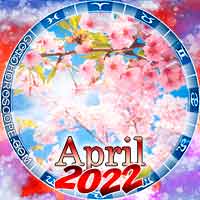 Or read general April 2022 Horoscope for a month ahead

April is quite the month. But it's Aries season, so what did we expect?The big theme is advancement, but with this idea of charging forward like the Ram that symbolizes Aries, there's also the big impending truth that bashing your head against your obstacles is going to hurt. The funny thing is that this month we have two significant conjunctions. The first happens between the ruler of Aries and God of War himself, Mars with Saturn, the planet of toil, God of Time, and therefore also Death. And that naturally sounds very gloomy and dramatic, right?

But as much as there's that, not long after, we have Venus and Jupiter coming to the rescue in Pisces, a sign where both the planet of Love, glamour and peace (Venus), and the one of wisdom, excitement and faith rejoice in. So if we're continuing with the Ram metaphor, April is all about smashing your head, figuring it out, so you can then rejoice and bask in the glory of the rewards of fighting for what you want.

We could even go as far as interpreting Saturn as the government, along with Mars, as the incessant infighting between countries. And Venus and Jupiter as the people, who with through the power of art, unity and wisdom, seem to figure something out along the way.

This means that perhaps it's time to really get creative and come up with ways to monetize yourself and the things you like. It's important to remember that with Uranus transiting through Taurus for the next few years, we'll continue to change our relationship with money, resources and how we create value. At its core, Taurus as the Bull or Cow symbolizes the milk, meat, and cash of simpler times. Our modern "bacon" —and I know that's a different animal— just became a little more complicated. The Venus and Jupiter transit lasts for most of the month, and the Mars and Saturn one, only two weeks. So don't be afraid to push through whatever drama might be going on in your life. There's a lot of hopeful energy coming around, and if you know how to use it, you can transform these battles into victories.

On the 16th, we have the Full Moon in Libra, echoing some of the themes of Venus since she rules this lunation. This is an exciting time because Libra and Aries share similar ideas of initiating something new and exciting. As an air sign, it's all about bringing people together and making things happen in the fairest way possible. There's a tremendous sense of coming together and spending time creating something with friends and family locally. If you've been thinking of starting a family business or maybe a small podcast with friends, this might be a good time to go for it. Still, it's important to remember that Cardinal energy is all about doing things for fun and because you're passionate about it. So don't pressure yourself too much and do whatever you need to do without big expectations. Simply trust.

The month ends with an Earth sign trine between Mercury and Pluto happening on the 28th. As the elemental nature of this transit suggests, this is all about bringing ideas down to earth. This transit only lasts a day, so it may represent big ideas that come suddenly but leave a significant impact. Pluto is in Capricorn, which could symbolize business meetings and exchanges. This could even suggest a relatively decent time to invest or trade.

On an emotional level, however, this trine can be pretty powerful. Pluto in Capricorn can represent your hurdles and obstacles, and Mercury in Taurus, a more grounded understanding of how to deal with them. The trine is one of the most auspicious aspects, so even a planet like Pluto, which tends to intensify situations a bit too much, benefits the people. Considering the month's narrative, it's pretty poetic that we end up with such a pensive transit. With the significant challenges and hurdles of the first few weeks and the rewards towards the mid-month, maybe by the end of April, we gain a solid idea of what we really want to manifest moving ahead. Take the time to reflect and sit with these energies because this month feels like the skies are really opening up. So hit your head if you must. It heals.