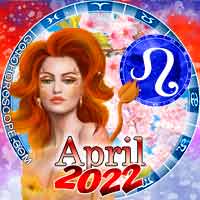 Spring is a season dominated by fire. It symbolizes the coming out of a dark and infertile time to face something much more vibrant and even wild. Leo, being the fire sign that it is, benefits greatly from the heat of Spring. It's no wonder why the Sun, the planet responsible for Leo, rejoices as the Spring starts. It's time for something new and exciting, and April's got you covered.

We start the month right away with a New Moon in your 9th house on the 1st day of the month. This lunation screams novelty and freshness. The 9th house usually deals with higher education, philosophy, and just the overall bigger questions in life. With that in mind, it wouldn't be surprising if you found that many of your Leo friends, along with yourself, are starting a new course or going back to school. Still, because astrology is symbolic language, one place deals with many things. The 9th house is also the place of travel. So, perhaps the ones who are not learning something new in books and computer screens will do a more hands-on kind of learning by travelling and exploring the world. Especially considering Mercury's influence in this lunation, even if you're just going on a vacation, there will be a moral to this chapter of the story of your life.

Now even with the good months, there will be some challenge. The rougher transit of the month is the Saturn and Mars conjunction. Traditionally these are known as the malefic planets, and for that reason, they represent more difficult aspects of our daily lives. This conjunction is happening in your 7th house, making it quite important.

The 7th house is one of the pivotal houses of the chart. It represents all our significant relationships. Sometimes romantic, while others, just important. Saturn and Mars together are a duo that aims to create boundaries and separations. This doesn't always mean break up in the literal sense, but you can expect to part ways with shared ideas or old plans with one of your significant others. You should pay close attention to this transit if you're around 28-30 but even more so if you're 18, 30, 42 or 54. While all the astro-terminology, along with the dates, can seem daunting, this transit is just a reason to bank on the opportunities for learning and exploring different aspects of your life in the earlier month.

Another transit that could mitigate some of the Martial-Saturnian problems is the Venus ingress into your 8th house, leading to further conjunction with Jupiter. The contrast between the last transit is great. While Mars and Saturn are the planets of trouble. Venus and Jupiter are the ones of blessings and opportunities. Considering this transit falls in your 8th house of other people's resources, you could expect winning financial disputes or making any sort of secondhand gain coming from your romantic partner or other collaborators. However, it's important to note that Venus is not only conversing with Jupiter. Neptune is another prevalent force in your 8th house as well, which can make even the most opportune moments come with a tinge of mystery and confusion. With that said, even when you seem victorious, be sure to be mindful of possible overlooked obstacles.

The Full Moon this month is also ruled by this busy and exalted Venus. It happens in your 3rd house, which is quite the auspicious spot to have a Full Moon in. The 3rd house is the place where the Moon excels. It deals with daily cycles, routine and our daily meditations or explorations of higher realms. With it ruled by such a strong planet, you can at the very least expect your routine to go a lot smoother. Though, for those who are 23, 35, 47 or 59, this will be an especially welcomed change in pace in an otherwise mentally exhausting year. Regardless of your age, however, be sure to store some of the auspices of this lunation for later usage.

Just before Venus starts to run the show, there's a transit we overlooked. On the 28th, Mercury will be making a trine with a Pluto about to go retrograde. This transit provides an intense intelligence and focuses on how to make things happen. Mercury, who's in your 10th house of career, can provide you with the words and the cunning you need to convince anyone to work with you, or maybe even to get that promotion you wanted. The trick here is to be unashamed of the hard labour you've been putting on your projects. With Pluto transiting the 6th house of effort, you're sure to have a lot on your resume to show off. It's time for a calculated leap of faith.

With all that said, April is a month of intense heat and action, the perfect environment for a Leo like you. Best of luck.