Or read general January 2023 Horoscope for a month ahead 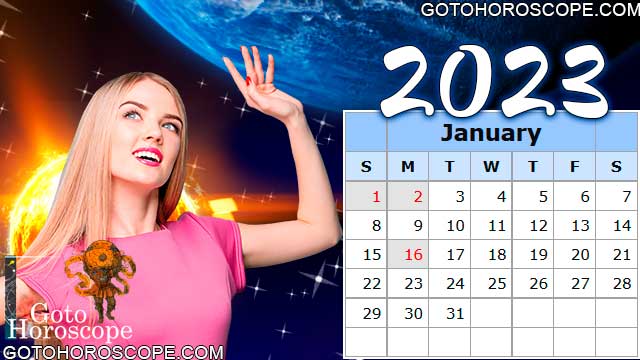 January 2023, perhaps, will surprise every zodiac sign. In recent years, we've grown accustomed to the Christmas and New Year's holidays, which are now filled with excitement, followed by post-holiday fatigue. We counted on them so much that during the first days of the 2023 year, we even expected a long post-holiday buildup. There won't be any of that this time. No more aimless fuss and idleness. We are headed for a purely business month, one that is purposefully active and filled with useful activities and meetings. At the very beginning of January 2023, the prospects for the year will suddenly become obvious, and everyone will immediately start implementing their plans. In other words, right from the start, January will be filled with quite businesslike communication and discussion of really important issues. The situation will begin to change rapidly. Illusory hopes at the beginning of the month will, by the middle of January, take shape into ideas and projects. The speed at which this happens can make some people dizzy. But that invisible force will push forward and forward, not allowing us to come to our senses, to reflect. On the one hand, it will be very difficult, but it is extremely important to focus on the main thing because, during this period, there is a very great danger of falling into confusion or wandering into the wilds. However, whatever happens at the start, January will turn out to be a positive month. An assertive attitude will come quite soon, and in that situation, the main task will be to accept this attitude and keep it for the whole year. Under this condition, whatever we undertake in 2023, everything will start to work out.

The first third of January will be held under the sign of family and friendship. It will be a time when people who feel good and comfortable with each other will gather at the same place, creating something like a meeting of the general staff with the exchange of information and the development of strategic directions. As for the business world, the first days of January will please entrepreneurs who have decided on preliminary negotiations. Expect a lot of very promising conversations. If invited to visit the company, the invitation to such an excursion should be accepted immediately because there will no longer be such a sure chance to get the facts first-hand. We need to add that the beginning of the year is a traditional time when a lot of people will want to speak out, and to speak out sincerely, from the bottom of their hearts. However, the first part of January is not the time when decisions are made and dots are put over the "i." There will be another chance for that. All this will happen, but a little later, near the end of the month. It is also better not to make long trips in early January. You can miss a lot of important things that will happen at home.

Mid-January will still be an ambiguous period, and therefore it is necessary to start new projects with all possible caution. It is better not to put pressure on subordinates, colleagues, or family members at this time—not to slow down, not to provoke certain actions. Instead, it is better to do personal things—both professionally and at home. It is necessary to restore working capacity, raise old projects, and view notes left in the form of a reminder for operational actions. It should be kept in mind that the middle of January is the perfect time for a showdown. It is during this period that it will be possible to discuss old grievances and find a positive solution. For example, to apologize.

The final ten days of January 2023 will bring the resumption of creative energy of the highest order. This will be a period of goal clarity and maximum self-assurance. After the 20th, the situation planned at the very beginning of the year will work for many. Perhaps the first pages of a dissertation, a business plan, or a work of art will be written, important negotiations will be scheduled and abstracts prepared for them. Someone will decide to make an unambiguous offer to a loved one. What is important to keep in mind during this period? First of all, there is no hurry. The intuition of this period will work at its limit; that is, the first decision will not necessarily be the most correct. At the end of January, it is extremely important to back up insights with rigid intellectual calculation. Our fantasy flew well at the beginning of the month. It's time to catch it and put it in the golden cage of the mind. The motto of the last week of January: question everything, and also trust, but check. If there is even the slightest doubt about the correctness of the step being taken, it is better to pause the process and think again. And you also need to know that January is a model of the dynamics of the entire year 2023. It's like we're programming success or trouble for ourselves, so we need to be on our guard.