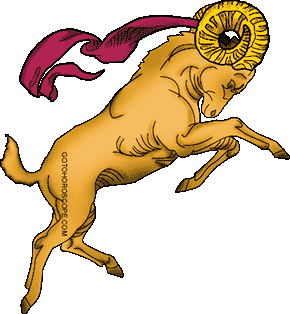 THE Zodiacal Sign of Aries commences on March 21st, but for next seven days, it does not come into its full power. It starts losing the power from May 14th. For seven days it is gradually losing its strength on account of becoming overlapped by the "cusp" of the incoming sign -Taurus.

People who were born in this section of the year have unusually strong will power and great obstinacy of purpose. They are usually born to be fighters in every sense of the world: they have also the greatest ability as organizers on a large scale. They find themselves as the organizers of immense schemes or as the heads of big businesses, and also in the organization and development of countries.

They seem natural to resent all criticism, and the only way to offset this in them is by quiet logic, reason, and proof.

These people are usually independent in everything they do. It is really important for them to do everything in their own way, and if they are intervened with by other people, they generally lose the shapes of the main purpose, step back and let the other person take their place.

As a rule, they are unhappy in their domestic life. It is very difficult for such people to meet a member of the opposite sex who would understand them, and if the opposition does not upset them from this point it usually does through their children.

Yet these people, whether men or women, deeply, fervently, and with a strong desire for affection and sympathy, more than anything else; this is generally the rock on which they are finally wrecked if they do not have the good fortune to meet their right affinities.

As far as material success or power is concerned, there are no heights to which persons born in this sign wouldn't be able to reach. Success, however, is not what makes them feel really happy and satisfied.

They are inclined to lack caution, being by nature impulsive and quick in thought and action.

They are inclined to make enemies very easily. They are enormously ambitious, as a rule, they succeed in life by gaining money and position.

The lower type of this sign will stop at nothing to accomplish their purpose. The higher types are good masters but at the same time severe in discipline and more or less unbending in everything they expect from other people. All representatives of this sign have a distinct desire to peer into the future, perhaps because they are impatient for things to develop. They are inclined to predict what will take place, and are often successful in that.

As a general rule, the men born in this part of the year suffer a great deal through their affections; they seldom understand women and make lots of serious mistakes in their relations with them.

For both sexes, they are happy only at moments when they are absolutely absorbed with their work and manage to overcome obstacles.

All people and especially those who were born in this sign seldom get through life without receiving cuts, wounds, or blows to the head, either from accidents or violence.

Mars is the Aries' ruling planet. It makes the people of this sign have an active life, constantly giving them the reserve of energy. That makes them careless, unruly, ambitious and competitive. This sign's place in the horoscope, first, also represents their need to be first throughout life. Aries is a very much self-confident sign. Aries' symbol, the ram, is an animal which tries to get everything with an impact of the head, and everyone, whoever has dealt with an Aries knows that they go directly to their purpose as persistently as the rams.

They will find their more lasting friendships and affections with those born during their own period or between July 21 and August 20-27, and from November 21 to December 20-27; and also from the center of their triangle, September 21 to October 20-27.

People born in this period should have more time to sleep than almost anyone else. They usually overwork their brains and are inclined to suffer from headaches, eye strain and other things concerned with the health of the head. They are also liable to get cuts and wounds in the head, and they usually run from danger. Such people usually demand constant medical attention.

The most harmonious color for them is all shades of red-crimson, rose, and pink, but if they are ill- all shades of blue and violet are most soothing and beneficial to them.

The birth stones for this period are rubies, garnets, and bloodstones.

Moreover, Arians do have a great sense of humor and on top of that , we do try to finish the pending tasks as well.