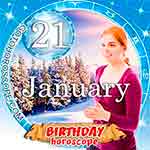 People born specifically on the 21st of January are believed to be outgoing, quick witted and full of curiosity. You are friendly, compassionate and sincere with large amounts of the typical Aquarian zany independence and creativity. The astrological planet that rules this particular day is Jupiter giving you excellent communication skills and your very original way of thinking. If you have this birthday you have a sociable charismatic temperament and although you are highly independent you love to be surrounded by friends. You present to others as having a humanitarian and optimistic attitude to life and you can laugh at anything, even yourself. Individuals with a January the twenty first birthday are generous and intelligent but they can also be egotistical and dreamily distant at times. Your magnetic, sometimes flirtatious mien ensures you are never short of company and you will also more often than not have an avid interest in the metaphysical.

In work situations a person born on the twenty first of January usually prefers a role that involves them being in charge. You are rather a perfectionist and have your own ways of doing things to a certain standard. Your compassion and friendliness generally makes up for this in the workplace but some people may still find you difficult to work with or for. As far as personal finances are concerned you are rather frugal with your spending and like to get value and satisfaction for your money. You organize your income effectively and are really good at improvising financially when you need to.

For an Aquarian, the person born on the twenty first day of January is untypically a touch conventional in their approach and views on romance. You are a strong believer in marriage and search for the long term commitment of soul mate loyalty and oneness. You are attracted to bright, chatty, confident people who know what they want from life and share the same opinions and ideals. A suitable partner will have to be understanding of your harmless flirting and occasional bossiness. Aside from these little insecurities you make a wonderful mate who is attentive, devoted, extremely loving and thoughtful. When you commit to a relationship you will be in for the long haul. You can be romantic and will usually make a special effort on partnership anniversaries and other important sentimental milestones in your relationships.

Any symptoms of niggling health problems experienced by those born on January 21st are often associated with eating too much or not sleeping for long enough. These are your main bad habits regarding your physical and emotional well being. As you adore your food you are prone to piling on the pounds and so should consider balancing this out with a bit more exercise. Alternatively try switching to healthier diet choices with less sugar and more fibre. If you make sure that your get a full nights sleep and do not try to burn the candle at both ends it will do a lot for your healthiness and complexion.

Your main strengths of character are in your genuine openness towards others and in your gift of autonomous creative thought processes. These fine characteristics grant you the friendship of many and help you make positive use of your sharp intellect, devotion and artistic flair in life. Weaknesses within the personality of those born on January 21st include the negative traits of indecisiveness and occasional self indulgence. You also have a tendency to adopt a speak first, think about it later outlook and can therefore be sometimes unnecessarily hurtful with your words. Avoid getting involved with idle gossip.

Being born on the 21st of January means you are likely to envisage a future for yourself based on a predetermined plan. From an early age you will probably have already decided a basic outline of where you want to be in life to feel contented. Your hopes and dreams often relate to fulfilling your ambitions and securing emotional happiness. Despite your wishes being simple you appear to require a few motivating elements and some degree of encouragement to achieve them. As you always seem to give everything your best effort with a persevering smile you are certain to actualize plenty of your goals.

As you were born on the twenty first day of the month your birth date numbers are 2 and 1 giving a total Root number of Three. This special numerical reference to your birthday has the keyword 'Innovation' and highlights your inventive nature and powerful imagination. The Tarot card linked to your birthday is the 21st Major Arcana card picturing the World. This could symbolize your down to earthiness and aspirations for contentment. The gemstone with the most luck associated with January the twenty first birthdays is the Amethyst and wearing it is said to greatly increase your intuition.

All Aquarians are thought to be astrologically influenced by the planet Uranus creating self expressive and inquisitive personalities. The actual day you were born, the twenty first of January is governed by the celestial body Jupiter. The cosmic combination of these 2 influential planets predominate your probable personality making you uniquely you. Your openmindedness and zaniness compliment each other perfectly and make you a lovely person to know. You just need to watch your proneness to participate in tittletattle even if it is innoxious and not allow yourself too much time to make decisions. A concluding thought for people born on January the 21st is to not be too perturbed by small changes of routine. Try to welcome them as these will often lead to improvements and opportunities.